A clown appeared showing our sense of humour about the flame malfunction in the opening ceremony.
Katriona LeMay Doan finally got her chance to light the cauldren and then 1000 grade 9 students sang and danced with their snowboards.
Our First Nations chiefs entered and they were thanked for the use of their lands.
Oh Canada was sung and Joannie Rochette led the flagbearers into the stadium.
The 2600 athletes arrive still full of energy after 17 days, they were seated and the party began.

Thanks was given to the tireless 2400 people who were chosen to act as volunteers.
The national anthem of Greece was sung by Ariana Gris and the Olympic anthem by Ben Hepner as the mounties carried the flag out.

Jacques Rogge, the president of the I.O.C. passed the flag on to the mayor Vancouver, Gregor Robertson who then passed it on to the mayor of Sochi, Russia. Sochi is a smallish city of 400,000 with a setting very much like Vancouver.
A choir then sang the national anthem of Russia and the mayor then invited all to come to Sochi for the games in 2014

John Furlong said goodbye to the Canada that was and to the new Canada that has been lifted up.

Its true, we have been lifted up.  Mr. Furlong said "now the world knows us, eh!"....or was that Jacques.....
One of them said "the agony and the ecstacy has been felt by us all. These games will leave many legacies and i wish the opportunity is available for every child to play a sport"

Merci bien to you too John Furlong and Jacques Rogge declared the 21st Games closed.

Neil Young sang "Long may you run" as the flames went out and the snow began to fall.

William Shatner then came out with a background of things that make Canada unique, even quirky, like Canada geese. Bill spoke of his pride of Canada and he said he wishes all to dream big. He added a couple million to the pop. when he said we have 35 million.

Catherine O Hara "curled" out and said she was sorry.  She was so funny...

Michael J. Fox said team Canada was still his home team. Mike puts bacon on his poutine and he adopted all people as Canadians.

Michael Buble as an RCMP sang The Maple Leaf Forever as oversized cops, giant bears, moose, lumberjacks and enormous hockey players danced around with a little boy dressed as a puck. It was very Canadian.

Nickelback sang and the crowd was a hoppin' and then Avril Levigne brought it up a notch when she sang Happy Ending and I want to be your Girlfriend.

Alanna Morisette sang Wunderkind
Simple Plan sang Your love is a lie
Hedley sang Cha Ching
Marie Mai sang something in french, i missed the name of it
and finally K-OS sang Eye Know Something

Then giant balloons and fireworks and it was over. Now the clean up and in 2 weeks the Para-Olympics will begin. 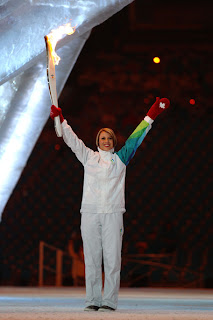 Katriona LeMay Doan
Posted by Lorraina at 2:55 AM