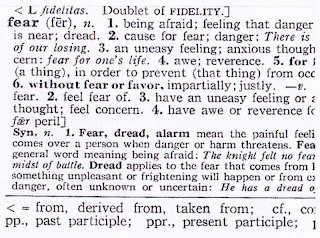 Dreams and nightmares; i guess we all have them. Do they mean anything? Are they a sign or warning? Do you pay any attention to your dreams? Especially the bad and reoccurring ones……..what do you do with them?


My there’s a bad man in the house nightmare has been reoccuring for a long time. Today as i was cleaning and sorting out a bunch of papers i came across an accounting of one of these dreams. It was dated Sept. 2006 and i had just started an online class on Julia Cameron’s The Artists Way.  I think i only lasted about 2 days in the class, but anyway, this was day one instructions - hand write 3 pages on anything that comes to mind first thing every morning….

This is what i wrote:

“Last night i dreamed that i was just stepping out of the shower when i heard a bell toll 3 times. I opened the bathroom door and started down the hall wrapping a towel around myself as I went. Suddenly a man stepped out in front of me. He was tall and thin with a long narrow nose and he was wearing a baseball cap. He saw me and changed his mind about robbing the place and he turned and ran out the door as i shouted “you bastard; get the fuck outta my house” I went immediately and locked the door and then it dawned on me - what if there’s another one and he’s still in the house? What to do now; unlock it and run out? Leave it locked, stay in and hope there’s not another one. Do burlars usually come in pairs?"

This “morning page” mentioned how i was concerned about the sound of the bell tolling 3 times, like in the Bible when the cock crowed 3 times and Jesus knew that he had been betrayed. Am i comparing myself to being able to receive signs like Jesus? Or what?

It’s always the same theme; Bad man in the house!!!  and i wake up hyperventilating and drenched in fear and panic but not jerking bolt upright like they do in the movies. The characters change and sometimes it’s two men; other times it’s one. Always strangers although i feel that they’re real men and i could identify them if i ever saw them again. What would i do if i saw him out shopping or somewhere....i'm no Alison Dubois so can't very well tell the chief of police.....uh sir, i dreamed that man is a bad man....

Last night i had the dream 3 times and jolted awake after each one. Different burglars every time and for the first time i recognised one of them. He was a country music star who used to have a tv show. I haven’t even thought about him in 20 yrs or more. Buck Owens i think it was, and maybe he’s dead by now, i don’t know; I’m not even a country music fan. He wore blue jeans and a baby blue plaid shirt and he looked young and fresh faced and energetic. What the heck was he doing in my house looking like he was just about ready to grab his guitar and burst into a cowboy song!?!!?
Posted by Lorraina at 1:06 AM

What a weird dream!

lol, crazy is more like it. I had THE DREAM again last night and again i knew the person who was the burglar. Don't know what to make of that happening again.

So Lalala do you have weird dreams too?

Not as weird as yours!

I've had repeated dreams when I was a kid, being in a very dirty alley with an old man. He would beat me up because I've done something wrong, and then the angels would be in the sky to sing and comfort me. WEIRD.

But again, not as weird as yours! haha.

Were you a terrible kid who did wrong things in back alleys? Haha
When did these dreams stop?

Hahaha, I think it all stopped when I became a teen.

It felt very much like a past life to me.... so real in the dream.

I've had that feeling before too. So, are you behaving yourself in this life?

Of course not. LOL.