The Canucks are in the playoffs! 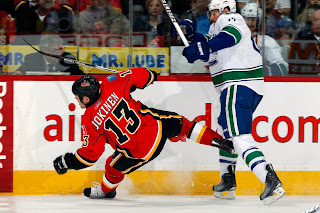 The stars are aligned. Montreal and Calgary staged the Olympics in 1976 and 1988 and then respectively won the Stanley Cup the following years. So it only stands to reason that Vancouver will follow in 2011, right?

The road to the Stanley Cup is a long journey filled with potholes but we know we’ll be there after last nights 3-2 win in OT against the Calgary Flames. It also secured the Art Ross Trophy for Daniel Sedin and the Jennings Trophy for Roberto Luongo and Cory Schneider.

But the Canucks must wait until later today to see who they'll face in the opening round. Right now, it could be Los Angeles, Anaheim, Chicago or Dallas finishing as the eighth seed. 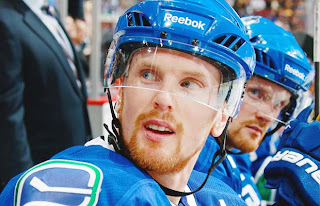 Daniel and Henrik know where each other is going to be at all times and their timing with the puck is second to none. I havent been this excited since Pavel Bure, the Russian rocket was on our team and I named my cat after him.

The 6 month grind is over. We’re in the playoffs!
Posted by Lorraina at 12:44 AM

My hubby is a hockey fan...he says Vancouver is a favorite to win...but, having said that...

have a good one,
bunny

Good for Vancouver. My age long love of the Leafs gets very little work out at playoff time it seems.

Hey Bunny, your Ducks are alright too, just not this year ok.
Thanks for dropping in!

Hey Blog Fodder, thanks for the good cheer. We are all in good spirits, tres hopeful and over the moon with this.
We'll see how it all plays out.
Thanks for the visit!

Not being a fan myself (of any sports), I can but say that I'm happy for your team. YAY!!!

Thanks Snowbrush! I did see your comment earlier but didn't reply due to fear of jinxing the game that we won tonight. I do that sometimes and don't usually learn to quit doing it and live to regret it. Im so happy that you're happy for us, thanks!