I was up way too early again and so were the people next door. They had their tv on loud at 6a.m.and alot of conversation too. I've never heard a couple that does as much talking as they do. I'm not sure if the sounds are coming through the walls or the door that adjoins our cabins but probably the door. Now, not all cabins have adjoining doors; i just got lucky i guess, lol. Adjoining rooms are usually assigned to a family with kids so they have access and can leave the door open if they want. otherwise the door is locked and cannot be opened except for the staff if needed. I also havent heard a sound from the cabin on the other side of me and so i gotta wonder if there's anyone in there but i'm sure there is and maybe it's a single because i know this cruise was sold out. At least now i know that if i flush the toilet in the middle of the night it isn't disturbing anyone.

I puttered around until 9 before going up for breakfast. I had another little visit with the chef with the long name. I try my best to get his words but have to admit that many times i don't understand a word he's saying but i let on that i do because it's usually a one way conversation and i'm eating and he's not.
Well, today he seemed snoopy asking if i was ok a couple of times and then even a "are you sure you're ok" It made me wonder if i looked like a mess and it reminded me of an incidence on my last cruise when one of the regulars there asked me if i was ok. I said yes, i'm fine thanks for asking and she says " well, that's good because you looked like hell yesterday"
I was shocked and insulted but didn't let on and just laughed. The woman was usually sloopy drunk even early in the a.ms.and often puts her foot in her mouth. Anyway i always take care of myself everyday with a shower, makeup, nail polish,, curl and style my hair and i wear clean and neatly pressed clothes, and a smile and a positive attitude. It made me feel insecure that this guy kept asking as if i was suddenly going to confess that i wasn't ok or something. WTF so i changed the subject and asked him if he had a nickname and he said his friends call him Mala so i will too. Co-incidently i had recently met a woman named Mala and it's a name i'd never heard before and now i know two.

So i finished my brekkie and Mala said he was going to look for me at dinner tonight and i said that would be nice but i left the room feeling strange about the way he seemed to be concerned about me or my well being or something and he was making a point of watching over me. Maybe it was something like a grandkid might say to their grandma. So i returned to my room and Anthony had already been in and done his thing, bed was made, fresh towels were hanging, dusted and vacummed and it was all spic and span along with a stingray towel animal on my bed.
I checked my appearance thoroughly in the mirror looking for whatever was wrong and didn't notice anything being off or out of the ordinary but it still bugged me why he had asked "are you ok" three times. I'm so frigging insecure it actually made me feel like not going out and about today so i didn't. How vain is that!
It was strange how my day suddenly turned but it was strong enough that it caused me to feel down with no energy and i just felt blahhhh. The power of suggestion even by a stranger is stronger than what i ever would have thought. Even right now i'm thinking maybe i should wash my hair. Or my clothes. Should i redo my nails? Lipstick? What needs to be done? Son of a gun, i dunno what!

So i played my Pharaohs Palace game and lost 5 or 6 million which was easily the most i've ever lost in one play session. But, i stuck with it all day and got most of it back.I moved up several levels in the doing and am now on level 490. It's a fun slot type game with many different levels or "worlds" and it took my mind off the question of the day.

About 6p.m. i decided to go for dinner back in the Lido. I had formulated a plan of how to respond to the question of are you ok? I will ask back "why do you ask?" It was as simple as that and it took me all day to think of it.

As it turned out Mala was nowhere to be seen tonight and i felt quite relieved. I found my friend Vivian and she had just arrived too and so we got our dinners together and then visited for a couple hours. Neither of us felt like going to the show, trivia, casino or art function. We just chilled and our dirty dishes stayed on the table all that time which was most unusual as there's always someone removing dirty dishes within moments of finishing with them. It seemed like there were hardly any workers tonight and maybe they're all players in the show or at a crew meeting or something. It was a very unusual day.

Meanwhile earlier today i got a call from the lady who is looking after the excursions for Guam, Malaysia and Vietnam. I've arranged for Carnivals excursion in Malaysia and the other two privately with her. It sounds like it's going to be an ordeal getting off the ship in Guam possibly because it's going to be a first for Carnival. She was preparing me for a similar scenerio like embarking in LA had been. I think we'll be supplied with a visa for the two countries as well as a possible face to face visit with the authorities there. Maybe we're the guinea pigs who will work out the issues for future travellers there. One plan was revealed and it was that passengers will be called deck by deck.. Not sure if that's going to work so all i can say is i hope there's a plan B.

Well, it's the way it's going to be done and guess who's deck will be called first? Mine, deck 1, lucky ol' me. At first i thought cool but then thought how hot it's going to be out there. It's hot as hell already and we're still hundreds of miles away and getting hotter as we go. This might be a good thing or a bad thing. I did bring some cotton tops but i'll be wearing jeans cuz that's the way i roll. I am a conundrum because i'm almost always cold and i hate the cold. I also don't like extreme heat yet here i am going to these hot countries, go figure.
Now, there's an example of that i might not be quite all right. Right? 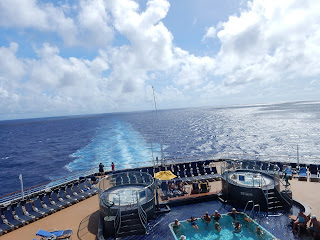 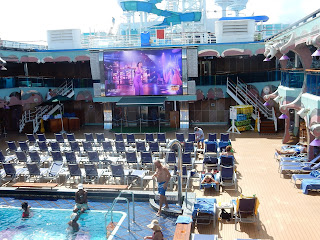 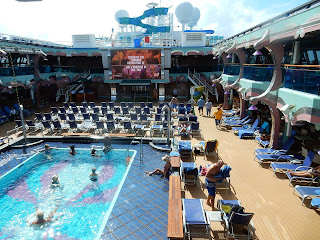 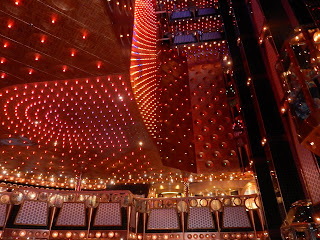 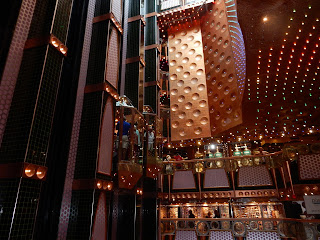