Casey Anthony; a combined take on a sociopath

The ever happy Casey Anthony 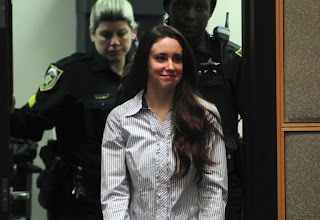 This is a collaboration of my friend Marianne’s story combined with my own take on the Casey Anthony story.

We can socially fault the Anthony family but the one who is on trial is 25 yr. old Casey.
Casey took the easy road and didn’t get a job, using her parents to support her and her daughter Caylee. Casey left Caylee with her friend saying that she was going to work when in reality she was clubbing and hanging out with her peer group.
Casey stole money from her mother and grandparents to the tune of over 7 thousand dollars.
Casey stole money from her friend and wrote bad checks for several hundred dollars worth of Walmart items like sunglasses, beer, party snacks and lingerie in the 31 days her daughter was missing. Nothing was purchased for little Caylee and it's now thought she was probably dead on day 1.
Casey fabricated the Nanny story and told family and friends that Caylee was with the nanny.
Casey told Amy H. that she was going to inherit her parents home (who knows perhaps they were next to go so she could fulfil this dream) and then she told Amy H. that her father was on the way to the hospital due to a heart attack and so on in a string of lies.
Casey lied to her current boyfriend about the whereabouts of Caylee saying she was with the fictitious nanny.
Casey told her peers who asked about her daughter that she was at the beach or Universal or Disney with the fictitious nanny. Everyone thought that was wonderful!
Casey lied to her boyfriend, peers, parents, and police about having a job that she did not have. How is it that nobody clued in to the fact that without a job there’s no money to pay for a nanny and furthermore, calling this fictious woman a nanny rather than simply a babysitter. Nobody clued in to the fact that with Casey there was always the element of upmanship with her saying the nanny was not only beautiful, she was actually a 10! Believe it or not this kind of thinking is what made her and her friends think she was a good mother.  Check out the silent breakfast video of Caylee at youtube to see a different kind of cruelty.
She lied to her family about the nanny kidnapping her daughter Caylee and to the police as well and they believed her at first because in her own words she said “I’m such a good liar” She lied about where she dropped Caylee off at the nanny’s and misled police on a number of wild goose chases which she led them to the very last possible second before admitting these lies. Oh, and lets not forget she told Amy that the reason her car smelled bad was because of dead squirrels and her attorney claimed that it really wasn’t dead squirrels it was just garbage in the trunk. Her mother at first claimed it was leftover pizza before saying actually, there was no smell coming from the trunk of Caseys car.
Casey pretended in court recently to be not of sound mind but was found completely competent by a group of psychiatrists to stand trial.

Casey wrote cryptic posts on her facebook, myspace, and lying texts to multiple people.
She wrote a cryptic note in a journal that included the words “everyone lies, everyone dies” In the 31 day period during the time her child was no where in sight she clubbed, drank, watched movies, shopped, got a tattoo that was eerily cryptic and tended to match the journal entry.
She posted photos of her fun, she had sex with any available young man as long as he was handsome and a fun kinda guy.
She abandoned her car in a lot and later lied saying her father took the car to the shop.
She dodged her family’s attempts to contact her.
She changed her story from the nanny took Caylee to her father raped her and her father helped her cover up a terrible drowning accident.
She has told people at various times different stories about her parents, brother, family, and even other people who did or did not exist.
She has real people she tells stories about and fictitious people she tells stories about.
She even lies about what she had for lunch instead choosing to say it was something else. When the investigation of her own daughter took place she lied to investigators, led them down many deceptive paths again and again, just as she has led the court, jury and us watchers down deceptive path’s blaming everyone but herself for her behavior and the disappearance/death of her daughter.

Casey has never, never, taken personal accountability for anything during that time but chosen to blame real and fictitious people for all that happened. She was found guilty of check fraud and fined but her parents agreed to cover the cost of the payment to her friend Amy. Maybe they did it to rescue her which seems to be a trend, or maybe they felt bad for Amy who had her money stolen too just as they had had their money stolen by Casey. Their motive really doesn’t matter, it’s what Casey did and what Casey is on trial for now.

In the end it is all subject to speculation as to what part her family played in messing her up, covering for her, cheating with lovers or whatever. Or maybe she was just born that way. Her family isn’t on trial for murder. Her family may well be morally bankrupt but that isn’t a punishable crime. They may have enabled Casey over the years to lie, steal, and not take responsibility for her actions and be held accountable but that isn’t a crime. There are things people do every day from road rage to stealing candy off the shelf of convenience stores and it goes unchecked. Society is full of dysfunctional people who are raising their children with no values. Dr. Drew and Nancy Grace have recently both declared they’d cover up crimes for their kids too, sending this message to millions of viewers; protect the kids at all costs! I work with the public and I see a vast amount of immaturity, anger, and all types of inappropriate behaviour so it doesn’t surprise me that the Anthony’s act inappropriately or dysfunctional.
But they are not on trial; Casey is on trial.
Casey was during the disappearance of her daughter and is a legal adult. No one took Casey by the hand and forced her into the decisions to steal money from her parents, so the convenient lie of everything is my parents fault has gone out the window there. In truth what the State’s Attorney and most of us know deep down is that Casey made the ungodly choice to kill her child. Her motivation seemed to be one of selfishness.
Casey is the one on trial and maybe her family did enable her but they aren’t the ones who were last seen driving away with Caylee.
Casey Anthony is a heartless killer who doesn’t feel any emotion toward anyone but herself. If her father cheated with a woman that isn’t subject to law. Of course there are moral and social soft laws, the ones that we all live by that aren’t enforced but we know right from wrong and so the Anthony’s have broken some of those but they are not punishable in a court of law, like murdering one’s own child is. Bottom line in all the speculation about her family is that they aren’t on trial for murder but she is. Cindy Anthony lied on the stand after swearing to tell the truth. She claimed to have been the one who searched chloroform on the family computer. She was proven wrong when it was found that she was at work at the time but Casey was at home making that search 84 times over a period of time, starting 3 months prior to the childs disappearance. Apparently she checked and rechecked the chloroform recipes as well as neck breaking, ruptured spleen and how to make weapons from household goods along with different types of shovels.

Antisocial Personality Disorder is also known as psychopathy or
sociopathy. Individuals with this disorder have little regard for the
feeling and welfare of others. As a clinical diagnosis it is usually
limited to those over age 18. It can be diagnosed in younger people
if the they commit isolated antisocial acts and do not show signs of
another mental disorder.

Antisocial Personality Disorder is chronic, beginning in adolescence
and continuing throughout adulthood. There are ten general
symptoms:

People with this disorder may exhibit criminal behavior. They may
not work. If they do work, they are frequently absent or may quit
suddenly. They do not consider other people's wishes, welfare or
rights. They can be manipulative and may lie to gain personal
pleasure or profit. They may default on loans, fail to provide child
support, or fail to care for their dependents adequately. High risk
sexual behavior and substance abuse are common. Impulsiveness,
failure to plan ahead, aggressiveness, irritability, irresponsibility,
and a reckless disregard for their own safety and the safety of
others are traits of the antisocial personality.

Socioeconomic status, gender, and genetic factors play a role.
Males are more likely to be antisocial than females. Those from
lower socioeconomic groups are more susceptible. A family history
of the disorder puts one at higher risk.

There are many theories about the cause of Antisocial Personality
Disorder including experiencing neglectful parenting as a child, low
levels of certain neurotransmitters in the brain, and belief that
antisocial behavior is justified because of difficult circumstances.
Psychotherapy, group therapy, and family therapy are common
treatments. The effects of medical treatment are inconclusive.
Unfortunately, most people with Antisocial Personality Disorder
reject treatment. Therefore, recovery rates are low.


This woman is not nuts but dangerous and should be found guilty of the crime of snuffing out the life of an innocent 2 year old child. Her mother should pay for her lies and attempts to cover-up for her evil daughter. The rest of the people involved hopefully will learn of all the clues they had overlooked.

Will Jose Baez continue insulting the jury’s intelligence with his story of how the child drowned and claiming Casey is innocent of all charges.

What are the facts and what is fiction? 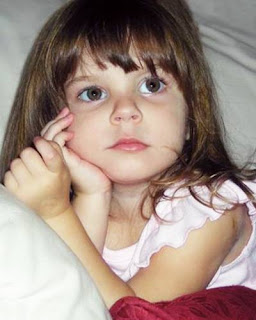 Casey Anthonys fate will then lie in the hands of the jury who did not see much of what the tv viewers saw. Live trial can be seen at

http://www.wesh.com/casey-anthony-extended-coverage/interactive.html
as well on CNN and HLN tv

this is a case that makes anyone with a heart and a conscience want to scream.

Thanks Anon and Just because. It's a terrible story that shouldn't have happened but it did and now we'll just wait to see what becomes of Miss Anthony. I do hope her mom Cindy has a punishment doled out to her for her lying, maybe George too. Whatever, it's in the hands of the law to handle and we must trust them to do what's right to bring some justice for Caylee.

Great story of the truth,we all know she and she alone did something to cause the death of her child and now she walks,while I say my prayers for caylee tonight I shall also pray that casey never is blessed with another child to murder! They should sterilize her before she gets out of jail!