Can this circus get any more colourful?

Jose Baez and Casey Anthony’s defense team are now working with a woman who’s married to a killer sitting on Florida’s death row.
The latest revelation came during jury selection this week, when mitigation specialist Rosalie Bolin appeared at the defense table with Anthony. As a mitigation specialist, her job is to find information about Casey Anthony’s life that could help the defense in the event she’s found guilty.

Anthony is thrilled to have a new best friendBolin’s well-known in the Tampa Bay area, not just by attorneys who turn to her expertise in death cases, but for her personal life.

She used to be married to a Tampa attorney — until she met murderer Oscar Ray Bolin Jr. who waits on death row after viciously abducted, torchered, raped and killed three women. Ms. Bolin divorced her husband and gave up custody of her 4 daughters to marry this guy over the telephone, much to his delight I bet.As of Friday the jury count stands at 12 possible or probables. More people are summoned to appear this next week including homeless people from the shelter next door to the courthouse.

I’m hoping to see a fair trial with a competent jury of Caseys peers and all evidence discussed in the order of the timeline of the case. But with Baez at the helm for the defense it likely will be as slow and as complicated as he can make it.

Attorney Anne Finnell has started sprouting lies and excuses for Casey already, as if theres any excuse for killing a child. How Anthony will stand up to the scrutiny remains to be seen. 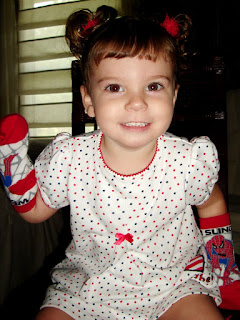 Are those casts on her arms?

Oh no, i think just playing putting socks on her arms. As far as anone knew Caylee was healthy and wasn't abused having lived her life in her grandparents home.
Except now in retrospect many people question that towards the end of her life she often appeared to have dark circles under her eyes and in the last known video of her visiting her great grandpa there appears to be chunks of hair missing but it could be just the light playing tricks.