The night started off great with spaghetti that i didn't have to cook and then an exciting game. I thought i was either going to have a heart attack or come out of it with an ulcer but it was totally fun and a great game either way and thinking you're going to have a heart attack or get an ulcer is all part of a hockey fans life. When all was said and done we came out on top with Henrik Sedin scoring the winning goal Thank you God for bringing Henrik out of his playoff slump. 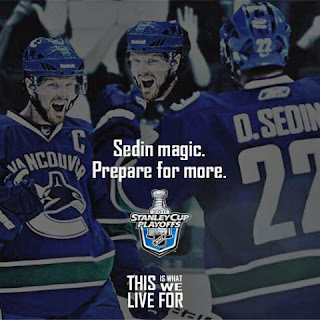 And then there was the Survivor finale. I am not a Boston Rob fan; never have been and never will, it's as simple as that. But i could tell right from the start that he was going to win. No, not because he's such a great player but because i don't like him. At all. Do not like him. But of course he won. Not only the million dollars but Sprints favourite player or whateveritscalled for an another 100 thou as well.

I am so mad. This ruined the nice evening i was having even though anyone could see it coming from the start. As in yes, i'm saying i think the show was rigged in his favor right from the get go. How can they do that? Well, i dunno, don't know nutting 'bout rigging but why were there no swimming/diving challenges? Because Rob dosn't do well in those? Why were there so many word/scramble type puzzles? Because Rob does well in those? Jeff  Probst even revealed his favor wayyyy back and it was obvious the producers favoured him for the ratings and for the fact it was Robs 4th time to play...how many chances did they give the guy? FOUR times! And they advertised it 4millions times! It was soooo obvious he was going to win, they practically advertised it as such and he did, dam it.

Now in all honesty, how can a fireman take off and be gone all these times? I seriously don't think the guy is a fireman, probably never was but if he used to be i don't care. He isn't now.

How or why did those ditsy girls fall under his spell? Why are people so stupid that right down to the final cut they were still saving the crispy bits of rice for Rob, why? Because Rob liked the crispy bits! Nobody else did? OMG! He had them all quivering in their bikinis, telling him every word that had been spoken when he wasn't around. And he used them all as his pawns voting them off one by one and the strange thing is - nobody seemed to mind giving Rob the win and the other win, like they had been paid off or something? Is it possible that they all played from the start knowing they wern't going to get no million bucks, it was Robs?

He is the most arrogant man alive and he's already a millionaire for petes sake. Gawd! He referred to them all as idiots! And they were. None of them were already rich, except for Russel but they got rid of him asap. Matt was a nice guy but spent most of his time on Redemption Island. I starting rooting for special agent Phillip way back weeks ago as he was more deserving than Rob. He was honest and kind, never said a bad word against anybody, never stabbed anyone in the back, did what he was told, never won a challenge or immunity and just quietly went about being helpful while his pants were being buried in the sand and everyone snickered and made fun of him.

Most if not all the players called Phillip names, said he was weird right to his face, didn't believe in him and laughed openly at him, and so on revealing themselves to be the real idiots. It was disgusting to see people really doing this, like bullys, even the big football player did it and so did the girls. I hoped that the phone in people would at least give Phillip or Matt or iforgethernameblondgirl the $100,000. But no, they thought Rob should add it to his already millionaire status. I can hardly stand it. People. Wake. Up.

I watched painfully when Rob played Survivor for 4 seasons, i watched as he hooked up with Amber when she won the million. I watched them marry in a billion dollar wedding at Atlantis on Paradise Island and come home to a fabulous brand new fully furnished mega bucks house and i watched the two of them try to win the Amazing Race as they travelled around the world like a royal couple. I'm sure between the 2 of them they have plenty of $ from endorsements, commercials or whatever rich people do to get even more $ and it just ain't fair.

Call me a spoil sport or sore loser, whatever, but please do call me.
Posted by Lorraina at 2:04 AM