Sabrina graduates and the Canucks win 1 - 0

June 1, 2011 will go down in history. Sabrina graduated from high school; isn't she pretty? 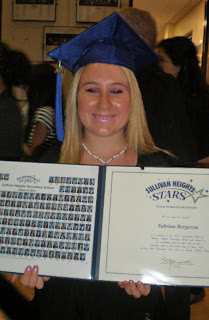 At the same time the Canucks were meeting with the Boston Bruins for game #1 in Vancouver.

Oh no. Who picked this night? Who even knew Sabrinas grad would be on the night of the first game with Boston?

As the speeches went on, and on, and the students of Sullivan Heights graduated in alphabetical order, and my grand daughters name begins with B......we had to stay and miss the game as they rolled through 200 graduating students from A to Z.
Some of the boys were cute on their way to the podium to receive their diploma as they tore open their robes to reveal they wore Canucks jerseys underneath.

Suddenly someone in the audience called out "Canucks 1"  and i waited, expecting to hear "Boston 2"
But that was all he said. 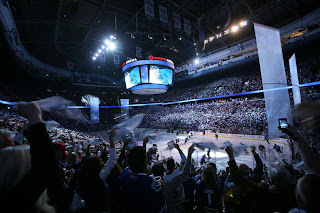 this was what was going on 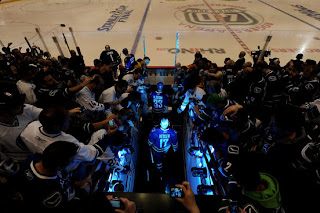 Henrik Sedin and Ryan Kesler take to the ice 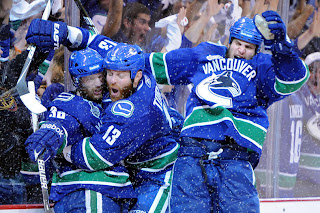 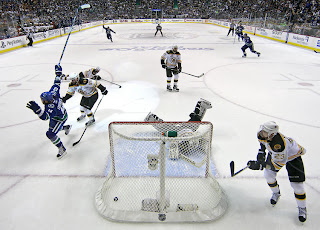 gets the winning goal with just 19 seconds to go in the third period! 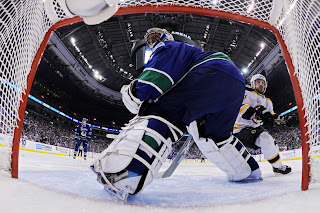 and *Roberto Luongo* gets a shut out!!!

June 1st, 2011, first game in the finals between the Vancouver Canucks and Boston Bruins.

History was made and more coming. Stay tuned for next game Sat. June 4th 5p.m.
Posted by Lorraina at 12:53 AM

omg Bunny when i first read this i thought oh, she found my facebook which reminded me to hurry up and go delete something that came outta my mouth (or my fingers)and i later found out was wrong. Anyhow, now i know it wasn't so yeah, heard about the finger biting which is exactly what i'd do if someone put their finger in my mouth too, lol! Did you watch the game? Curious if it's shown around and not just where the teams are from.
Thanks for dropping by, was thinking my comment thingy was broken again

She is indeed lovely. Congratulations to all involved.
And the Canucks seem to have figured out how to play this game.

Thanks Fodder, Sabrina was absolutely radiant. I'm so proud of her for getting through it even though visually impaired. She attended french immersion from K-grade 9 and all her school work until then was done in french Braille.At age 14 she wanted to go to reg. english high school and while fluent in both languages,she had no english language understanding as that was to have started in the next yr. She had a hard row to plow to catch up with that but she made it! She is the daughter of one of my twins, who at their time of graduation were the first ones in my families history to ever do so.
Now out of 7 gkids i've 6 who've made it; the 7th will graduate in 3yrs and i'm feeling great pride and the triumph for my family. The Blakes have come along way from the wilds of Labrador and my dad would be so proud.

My heartfelt congratulations to Sabrina and the Canucks.

Thanks Snowbrush and i hope you are well. Game 4 coming up just over an hr and we're hopeful and positive that we can do it with the power of home ice.
What will be will be.