Back on the Big Island but the opposite side at Hilo and in a different climate
zone. Had breakfast with Don and Jan; Jake and Myrt were off on a volcano tour.
We walked off the ship and shared a cab to the farmers market. 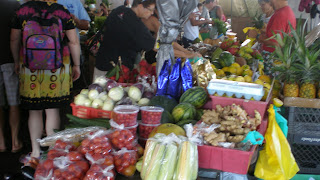 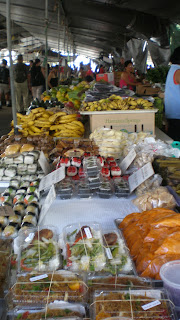 All sorts of artists and their wares here as well as fruit, veg and flower
growers. Watched a guy peel and chop a coconut, holy shades of Survivor
when the machete narrowly missed cutting off his hand and/or hip.
He passed the coconut to a lady to drink the milk; i guess it was for a price.
I would have liked to try it but it was too hot and muggy and i'd have to
stand in a mud puddle to wait for him to get it ready. 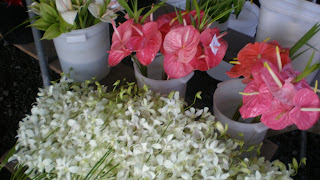 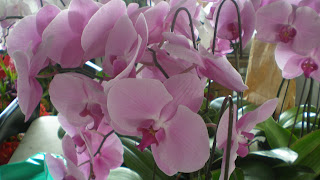 This is not a fancy smancy market but rather very makeshift and untidy. But
then there was the fabulous butter avocado; humongous in size and tree ripened
unlike the rock hard little variety we get at home and a sample slice did indeed
have a smooth buttery texture and wonderful flavour. Saw all sorts of flowers
and honey,soap, home baked goods and of course macadamia nuts and misc. 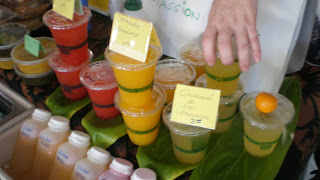 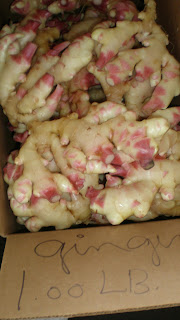 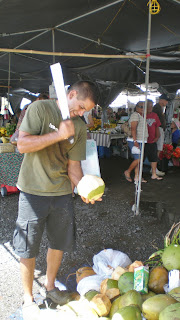 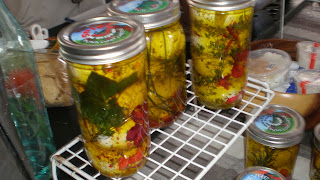 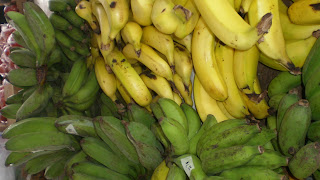 Across the street were the tents of handcrafted tems,t-shirts and other
clothing, hats, jewelry, knit, crochet and knotted items,metal things,art,
photography, toys, spam sandwiches and everything enjoyed with live
music coming from a stage in the shade nearby. Then we were pooped
and hot, and old. No water to be found here either. Lost our friends in
the crowd so shared a cab with another couple back to the Spirit with a
great lady driver who pointed out the sights on the way.There was a
hilarious moment when the driver asked if anyone went to Akaka Falls
and the guy in the back heard wrong and he said yes, he needed to kaka.
Back on board by 1p.m. for lunch and by 2p.m it was nap time again.

I am sorry to say Hilo missed the class on tourism, it was all hit and miss,
no free shuttles to anywhere and even Hilo Hatties bus wasn't seen,nothing
going on by the dock,way to far for spoiled cruisers to walk anywhere in the
heat and humidity with no benches to sit on anywhere and no seating
available at the marketplace either. My guess is they also don't understand
that alot of the passengers on cruiseships come from very different climates
and alot are elderly ol' peeps....but surely they must notice that. Whoever
figures this all out might take advantage of the situation and oh, the tourist
bucks that could be made here off of those not on an arranged cruise tour.
But i guess that's why the cruise ships come here: they've got the action
pretty much covered with tours to Volcano to see a little steam coming out
of the ground and who cares about the people who have already been there
done that, but once is enough usually. I could also see a lucrative market for leis
and sleeveless dresses along with light sweaters,shrugs or capes because
everyone from the ship was looking for something to wear to the Hawaiian
nights planned onboard and as well ships are well airconditioned and actually so
freaking cold onboard who would purchase the sleeveless dresses there without
wanting a coverup of some sort to wear over it. I certainly didn't bring enough
sweaters and this was my 4th cruise because it's so easily forgotten when one
simply thinks i'm going to (wherever it is where it's always summer) and you can
always buy what you need when you get there.
I'm sure a lot of ladies were in the same boat and many didn't wear Hawaiian dress
to dinner and i was one of them having already worn my one light Hawaiian top
from the last island already, I didn't want to wear it 2 nights in a row so i wore
regular dress. A real flower lei would have been a nice find at the market also but
instead i had only the free poly itchy one from Hilo Hattie that didn't co ordinate at
all with me or my top. ohhh the bitchy ravings of a crazy Hawaiian cruiser......

Tonight's dinner was maybe the best one yet. I had a delicious gazpacho and
tilapia for my main dish and a bread pudding for desert. Later we had a few
hands of poker and Bob discovered machine Keno which is actually funny
because he plays B.C. Lottery Corp Keno everyday at the mall but had never
played it on a machine. Ironically i had often suggested he try it at the
casino (because he's a lousy poker player) but he always played poker, even
after i won 4 grand and then 2 grand on my first attempts of playing Keno
and then a while later i quit playing it because it was so boring.  But i think we
now have a casino Keno player in the house and that's a good thing as he
actually likes playing for .25 per game which is $1. cheaper than poker which
however i will always play for the max so i can win the max.

We did the ship walk wobbleyzig-zag all the way to our cabin and tonight
there was a phone message from CCL re our now soppy carpet, an apology and
a monetary offer for the inconvenience it caused us. Needless to say accepted
because it had been a PITA trying to get past that section outside of the bthrm
and right in front of the closet without getting our feet soaking wet.
Yesterday a crew had been in here and pulled the couch out; unbeknownst to us
it was wet under there as well and a huge blower helped to dry it out once
they figured out where it was coming from which we guessed had been the air
conditioner.

I experienced the ship laundromat today; it wasn't really needed but down the
hall i went with a small bag of dirties only to find it consisted of just one
washer which was already in use and two dryers, one in use. So i quickly
washed a few things by hand because who knows if that washer will be
emptied when it's done since the owner was no where in sight. Bought a box
of detergent from the machine and hand wrung those duds as dry as i could.
Then the dryer had difficult instructions (because they keep track of who
uses it) but finally figured it out and all charges go on the cruise tab as the
machines don't accept cash.
Apparently they think no chair is needed but there was an iron and board so
i stood there and played with my Ipad. Eventually the owner of the stuff in
the washer appeared then 2 more ladies and the little launderette was so
full and steamy hot it was difficult to breathe in there so i removed my
things before they were dry and now have them hanging all over our cabin.
Total spent on this little chore should have been $4. But notice on my bill
they charged me $5. so maybe i made a mistake by the time i finally got it
set up or i opened the dryer door to check and then maybe it charges you
when it starts again, i don't know. It would have been $7 had the washer
been available) And i know i could have sent a whole lot of laundry in a
bag for 1 day service, wash, dry and folded for $12. But I didn't because on
our last cruise i did and all our clothes came back clean and dry but a few
sizes too small, just when you can't do that cuz people on a cruise are usually
gaining, not losing weight.

Wrong images on this video for this very Hawaiian song but wanted to add
the music and lyrics about a young wahine selling papaya and green and ripe
bananas by the highway. When i first heard it i thought it was green and white
bananas and i was puzzled but of course its green and ripe bananas and i'll
never live it down. 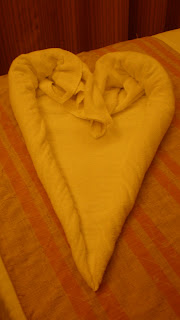