We are still on Maui for another day but so far from the action and with
nothing better to do i took the Hilo Hattie shuttle to a Wailea shopping
center for something to do and to check out things there. I shopped and
then tried to a grab a frappacino at Starbucks but the bus came too soon
and the frapp lady was so slow and with an indecisive customer ahead
of me couldn't take the chance of missing my free ride back ( a cab would
cost about $70 or so said the bus driver) Back at the ship warehouse
i shopped the few tables there and everything would have been fine until
a saleslady tried way too hard to convince me that 60% cotton 40% poly
was exactly the same as 100% cotton.....lol, i didn't fall off the turnip truck
yesterday; that combo would heat me up and kill me in this climate in no
time. It was weird and spooky walking alone through the cold,dark, empty
ship as everyone has probably gone to Lahaina today or maybe on a tour
of one of Maui's many attractions. Back in the cabin and Bob was napping
with the tv on full blast. Didn't feel like walking to the other end of the ship
again for free cocktail hour so i sat on our deck and watched the
longshoremen and longshorewomen transfer newly arrived cars around the
port while i did my nails. Somebody today will be happy cuz they're getting
a very cool old VW van; every longshoreman has looked inside and i could
tell even from a distance they all approved.
It's windy on this side of the island too and i thought my manicure would dry
fast but it didn't happen and they were still punky and i got them all marked
up but it was too late to fix cuz soon it was hurry up get ready for dinner time
again.

For dinner i had a nice crab cake and an arugula and mint salad for my
starter and mahi mahi for my main, cappuccino pie and coffee and now off to
the last bingo and a chance to win $5200. Then the show and last visit to the
casino and we will be departing for Oahu soon.

Omg,our friends Myrt and Jake won the bingo and i am so pleased for them!
Myrt was sitting beside me and i was watching her card as well as my own cuz
i'm nosy that way and  noticed her card was filling up much faster than
mine and sure enough soon she was down to one number and i nudged her to
stand up. She was the first one standing for quite awhile as they called
number after number and i'm sure her heart was sinking. With each new number
more and more people were standing until finally N-43 and she hollered and
unbelievably she won it alone! Later in the casino i heard a woman saying
she needed N-44 and i think a lot of people would have shared the pot with
that number but i still needed 3 numbers so not even in the race. Myrt had
mentioned earlier she'd like to go on an Alaska cruise so i hope the win
helps make it happen for them because they are a great couple and they
deserve it.

The show was Legends of music and it consisted of passengers and crew
who had auditioned a couple days earlier. It was super funny when the
cruise director came out as Dolly Parton. Other performances were a
priceless Sonny and Cher, Britney Spears, MJ, Elvis, Frank Sinatra and
others who all did a great job. The casino was full of smokers again and it
was instant headache time for me but I stuck it out for an hour or so of
poker before cashing out for the last time then we hit the Lido for a
midnight snack.

Here's "Somewhere over the Rainbow" by Israel (Iz) Kamakawiwo'ole 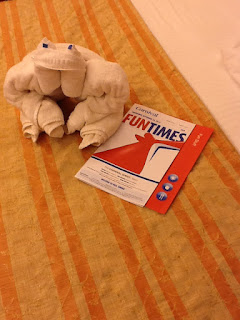