Wish it was Friday because it would be art night in Lahaina and
the artists come to the galleries and it's my favorite time.
Maui, i' m excited because " Maui no ka oi" (Maui is the best)
unexcited because we'll dock at Kahului the opposite side of the
island from the good side with Lahaina and sunny Kihei. Rent a
car or jump on a bus.....we' ll see.... 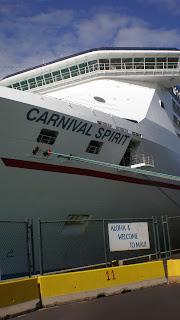 10:30 a.m. and we're tooling our way up island in a compact little Ford,
Hawaiian music blasting away as well as it's able. This island is booming;
lot's of changes have happened here,all good. Population explosion,
expansion, construction and growth going on like crazy, wish we would have
bought the one month timeshare on the beach that i wanted back in the mid
nineties; it would have been a great investment at a great place on the island
we love best. 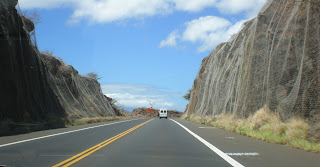 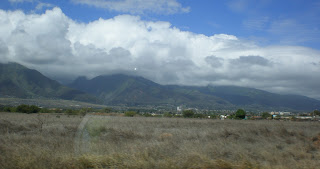 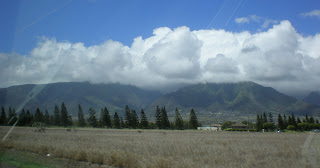 roadwork on the road to Lahaina 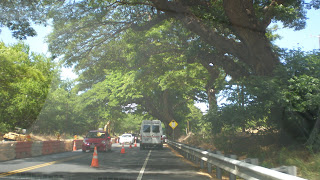 Lahaina is busier than ever,the prices much higher and most of the shops
other than the art galleries all have the same goods and prices. The Banyan
tree is larger than ever and we thought of Donny sitting in the dappled
shade and sunshine beneath it while an artisan made him a hat out of ti
leaves. It was a sad memory as Donny passed away a few years ago and we
had shared a Maui vacation and a Mexican trip with him and his wife. 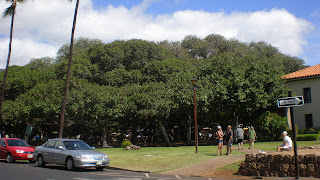 The famous Banyan tree covers an acre and provides a great shady place for
artists to ply their crafts. It is one tree that has roots that hang down from the
branches and when they reach the ground they root and grow like a trunk to
help support the mother lode. 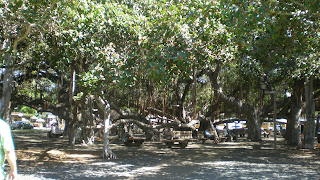 We either missed the Carthegenian or it's moved or it's just plain gone, same
guy with his colorful macaws for a cute photo op in the same location; it was
all so familiar and like coming home. 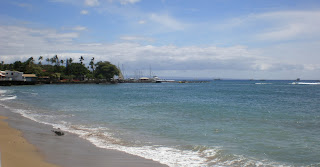 Art galleries, oh my, saw some fabulous stuff....in one gallery i admired a
gianormous painting, maybe 5' by 7'and the next thing i know the sales lady is
lifting it down off the wall and she said follow me so i did into a viewing
room where she hung it then played with the lighting and OMG it was the
most wonderful thing i have ever seen; not in any gimmicky color change way
like the nail polish that changes color in the sun or anything like that; it was
painted in such a way it was awesome in the light and equally so in the dark
and everything in between. So Bob asks the price (maybe he was thinking he'd
buy it, lol!) and it was $28,000. plus change,minus the frame which was
awesome and perfect for it and a few hundred for delivery. I can honestly say
that painting would be a joy to own and to live with every day and worth every
penny for some lucky person. I know it will be worth double that price in no
time,maybe ten times more and the artist is just 40 years old, but i've already
forgotten his name......ackkk, wish i had taken notes!

We ate lunch at Bubba Gumps Shrimp Co. which is always great; i had a mixed
platter of shrimp and chicken with a variety of sauces called All Around
America or something like that while Bob his usual fish and chips. Drinks were
served in glasses with colorful rainbows and crazy flashing lights. Our waitress
was great, even making a little impromptu quiz contest for which we didn't have
any answers for cuz it's been a long time since we've seen the movie. Out in the
ocean surfers were riding the waves, others were sailing the wind, little
chattering birds were flying in through the open windows, stingrays were visiting
the beach and dolphins were spinning offshore. It was awesome. 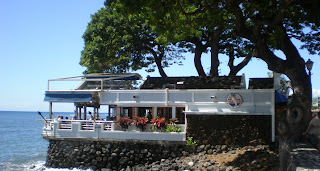 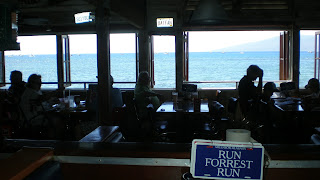 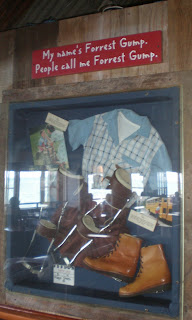 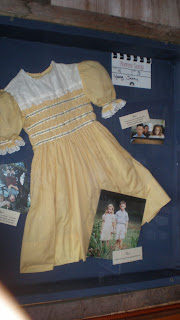 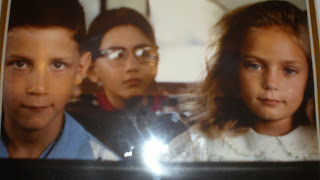 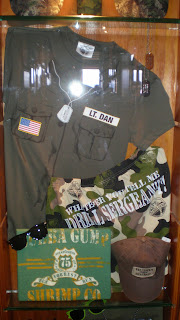 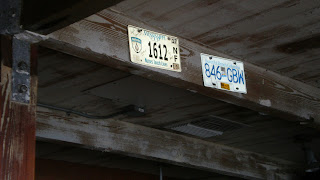 The island of Lanai from Bubba Gumps. It's the only one of the usual six Hawaiian
Islands i havent been on; came close once 10 years ago on a snorkling trip but the
wind caused the captain to cancel landing on a beach there and instead we snorkled
in the middle of the ocean whilst sucking up the gasoline fumes. Then as we were
motoring back to Maui we stopped and the motor was turned off because spinner
dolphins had joined us and they gathered around our boat at first by the dozens, then
soon there were literally hundreds and maybe thousands or more.They were
everywhere and very snoopy coming up close to the boat, leaping and showing off
spinning and looking at all the crazy people.That was an awesome experience. Is it
any wonder i love Maui. And i didn't even tell of all of all my experiences, tho they be
great but they were in the past and this is now. 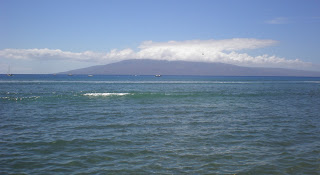 The beach at Bubba Gumps 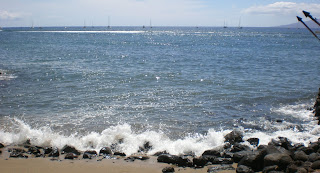 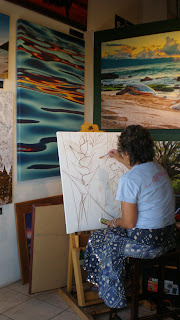 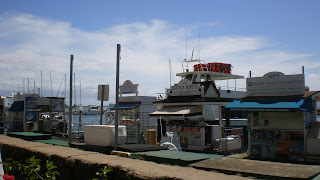 and in slip #1 my fav company The Pacific Whale Foundation 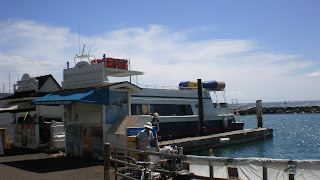 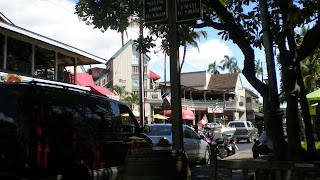 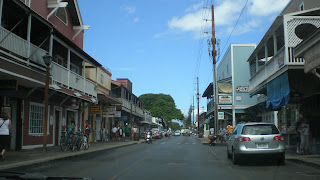 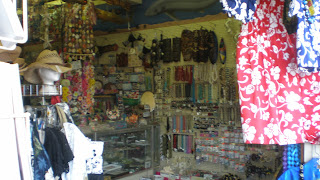 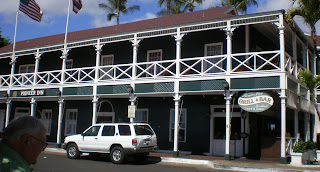 For the first time ever i didn't see a piece of jewelry i wanted to buy; too
much of the same stuff and their prices way too high. Maybe Oahu will
have something for me this time, but i'd really wanted another piece from
Maui. We then drove on down to our old stomping grounds in Kihei and it
was sort of the same and a little bit different. We stopped for a drink at the Witches
Brew at Sugar Beach and we were right on time for the wind.....omgosh, i
had forgotten about that 4p.m. wind and it almost blew us away before we
got in the door. This bar is papered wall to wall and ceiling with U.S. dollar
bills and Canadian twos which have been long gone from our monetary
system but we knew our two with our greeting was up there somewhere but
couldn't spot it. This resort is an old Canadian favourite and we always
stayed oceanfront on the 3rd floor except for the time we got a real ugly
orange and brown penthouse that we ditched after 3 days for a corner unit
on the 4th floor. My picture card was full so these 2 pics are from the web. 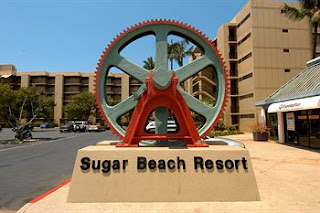 By the time we got back to the ship it was time to freshen up for dinner.

Myrt and Jake shared with us the champagne they had won in the show; it
was nice to celebrate their 55th anniversary with them again. Whatever it was
that i ordered for my dinner was absolutely gross and i couldn't eat it. It was
supposed to be a vegetarian dish and our waiter said it was eggplant but it
wasn't; it was some kind of canned meat battered with something and then an
attempt to disguise it by covering it with burned mushrooms. My cucumber
gazpacho was ok as was the cheesecake for desert so I'll live. After the
Hawaiian show later we had hot chocolate and frozen chocolate yogurt in the
Lido before calling it a day. 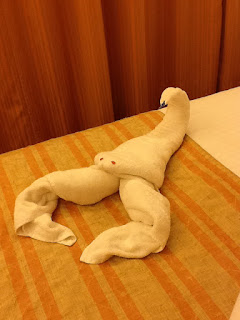