" Learn about Palermo and see the sights mostly from the comfort of your motor coach. Drive to Mount Pellegrino, standing isolated from the mountain chain surrounding Palermo, almost as if protecting the city. Here enjoy a great panoramic photo opp of the city at it's feet.. In Palermo drive along Via Libertarian, considered to be the most important street in the city because of it's size, the elegance of it's shops and the double row of plane trees which line this majestic way. See the 19th century Teatro Politeama and Via Ruggaro Seltima. Pass Via Maqueda and the neoclassical Teatro Massimo, Palermos Opera House built at the end of the 19th century.
At the intersection of Palermos four original streets marvel at Quattro canti, the Four Corners where you'll find four statues in groups of four, symbolizing the seasons, the Spanish kings and this cities patron saints. See the magnificent cathedral , the product of the blending of centuries of Muslim and Christian history and culture before visiting Foro Italico. Continue on to Corso Vittorio Emanuelle and Piazza Marina, surrounded by historic buildings of unquestioned artistic beauty. You'll make a stop at Piazza Marina to enjoy an ice cream."

Another miss for me because I was just too darn tired to get up, get ready, walk to the other end of the ship then half way back to disembark at breakneck speed to keep up with the crowd and then finally get on a bus in the rain. My friend Pat went and she wasn't impressed with the area or the bus that had steamed up windows which made picture taking difficult. A winter cruise here maybe isn't the best idea although it could work in a different year, just not this day in 2015. However having said that I understand summer cruises in this area are also difficult as it gets extremely hot here and there's a lot of walking over the difficult terrain of ancient uneven cobblestones. So perhaps a winter cruise will work for those people who are able to brave any variation of the weather especially if cool is preferred over steamy hot.
We went for dinner at the Moderno restaurant for Brazilian Churrascaria. Catchy name but we had no idea of what it was going to be. It turned out to be a protein feast. First the coaster at our setting was explained; to leave it with the green side up meant go, and the red side up of course meant stop. We were then directed to the salad bar with lots of fresh crisp veggies, soup, cheeses, cold cuts, buns etc. When those plates were removed from our table along came four pots, one with garlic mashed potato, one rice, one raisin sauce and one of breaded deep fried banana. Next a waiter arrived with two long skewers of bbq chicken legs and one of them was flavoured with lime and we both chose it so he pulled us off one each. I enjoyed it as it had been a long time since I'd eaten a chicken leg. Next a waiter with skewers of sausages and we both agreed to have one. So far so good for me. But then came skewers of ribs and I couldn't even cut into it with my very sharp knife so it was wasted. Then along came succulent skewers of lamb which I don't eat but Pat said was delicious. Next was a roast of beef; it looked good so I said yes and a slice was cut off for me. It was tough but I ate it anyway which made me tired with all that chewing so that's when I then turned my coaster to the red side. Pat was then offered filet mignon and she said it was  delicious and so tender she could cut it with her fork. I was too hasty and hadn't been observant enough to know there was fish yet to arrive and I would have had a piece but dems da breaks, I was served tough pieces of beef and gave up on the meal too soon. Who knows what else they might have presented if we had stayed longer, hope I didn't miss out on lobster or prawns or even chicken breast. I guess a real meat lover would sit all evening eating whatever appeared before them but I was ready for dessert and it was papaya ice cream with a crispy baked on crust of caramel and it was delicious. Other than that I must have drank a liter of sparkling water and it was very very good.
Arghhh, i forgot to bring my camera to capture all this!

My little view of Palermo 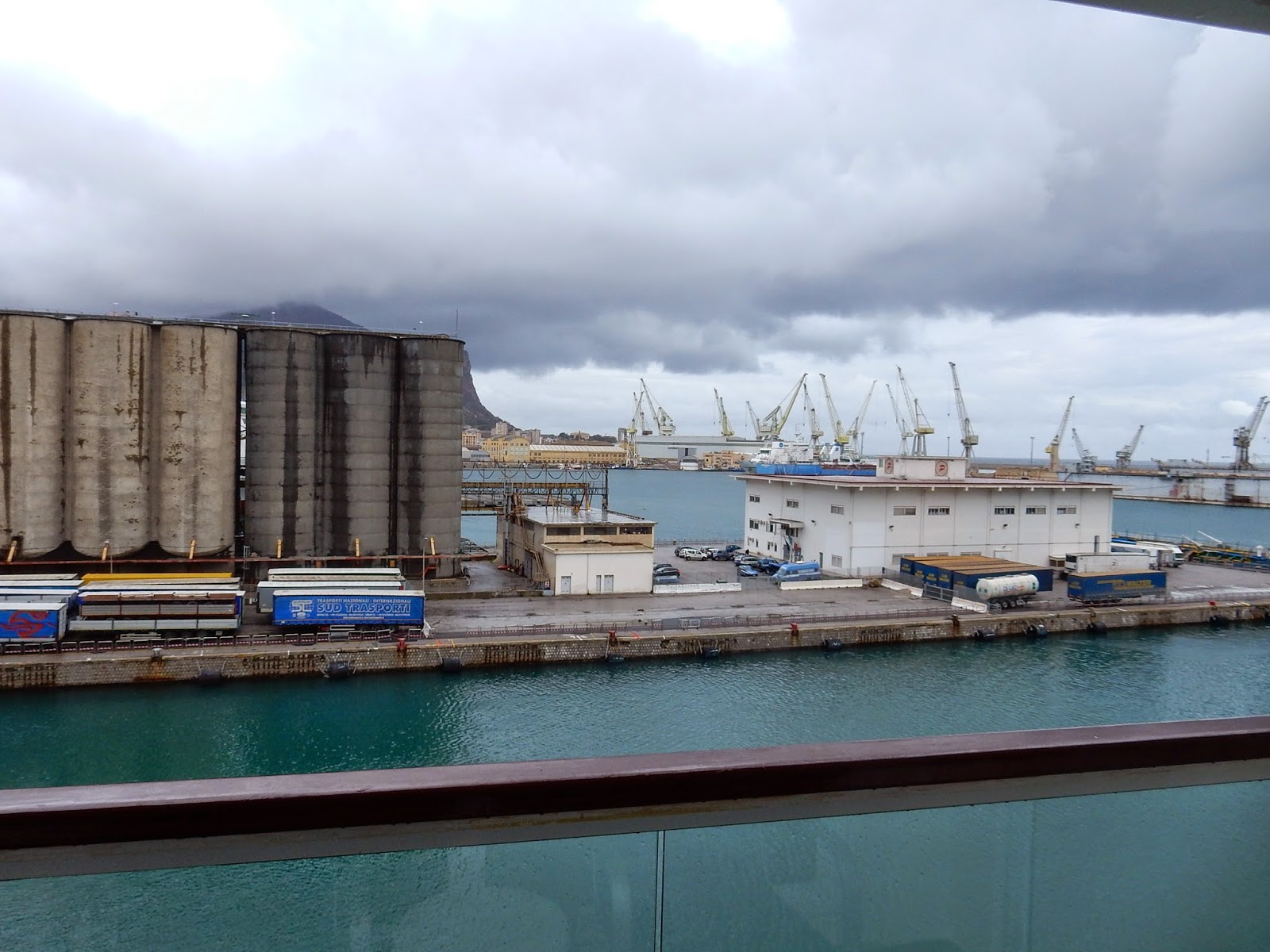 a tiny view of Palermo 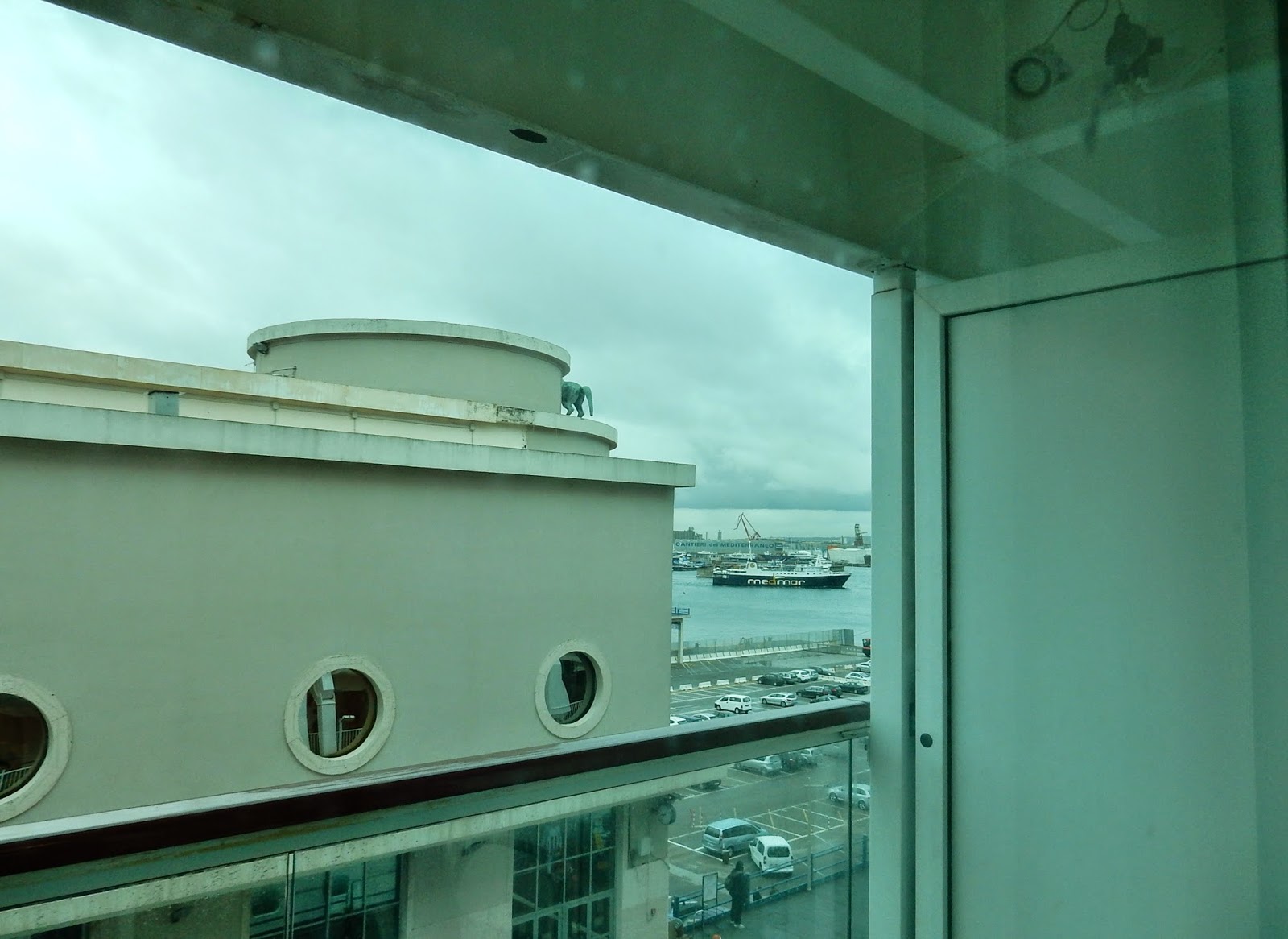 not many pics for this date so I will use this space to add misc. that were left over 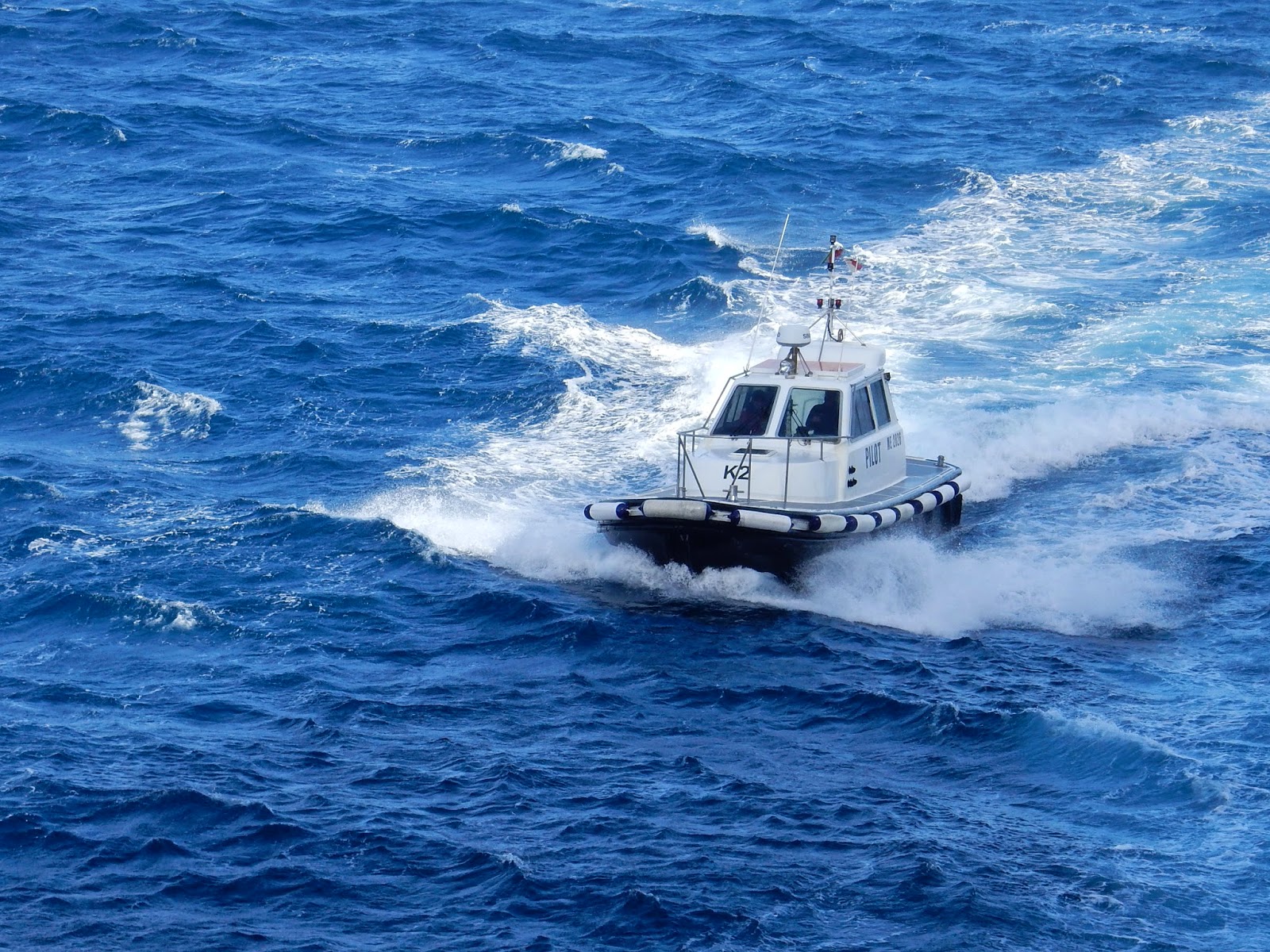 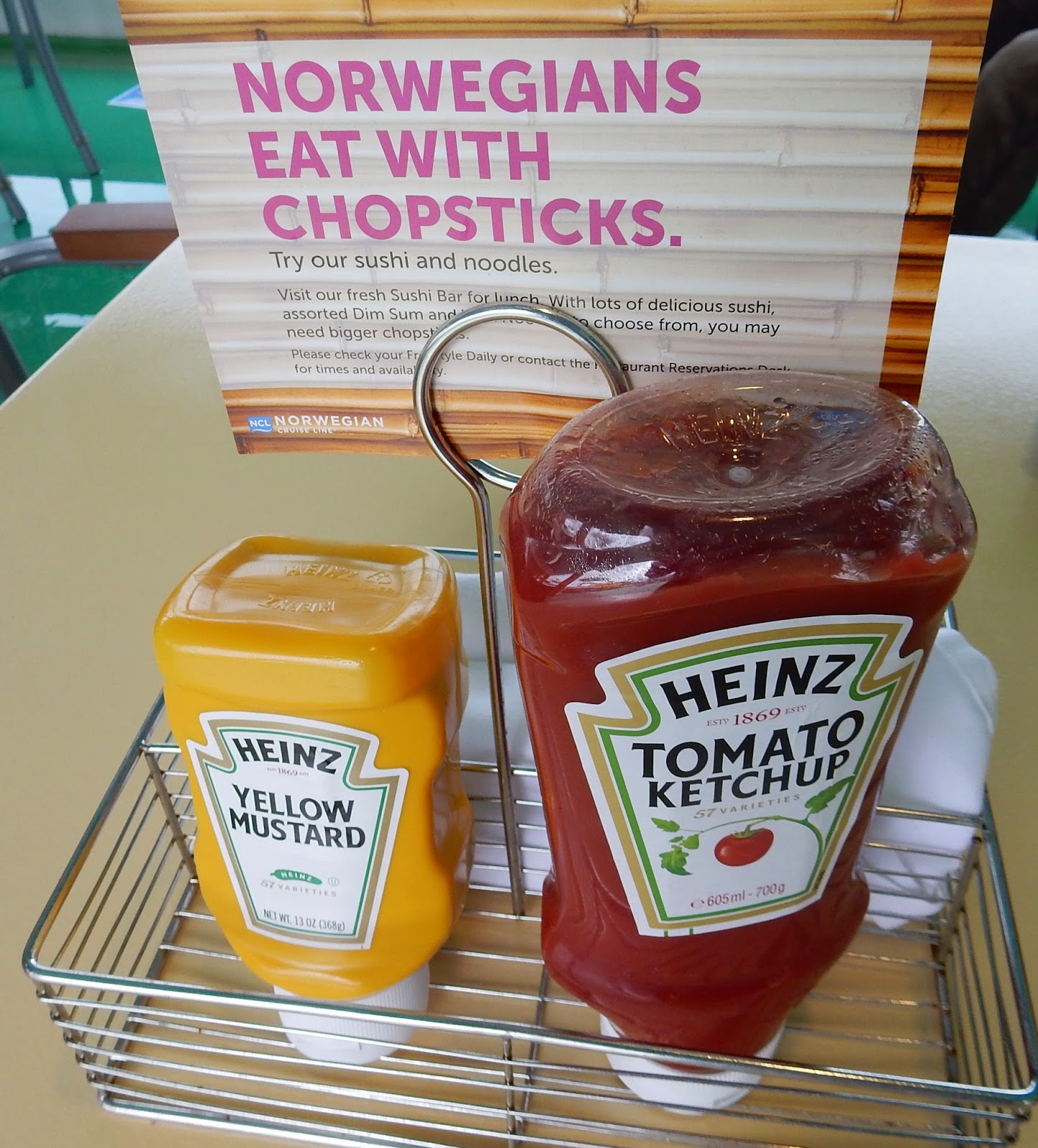 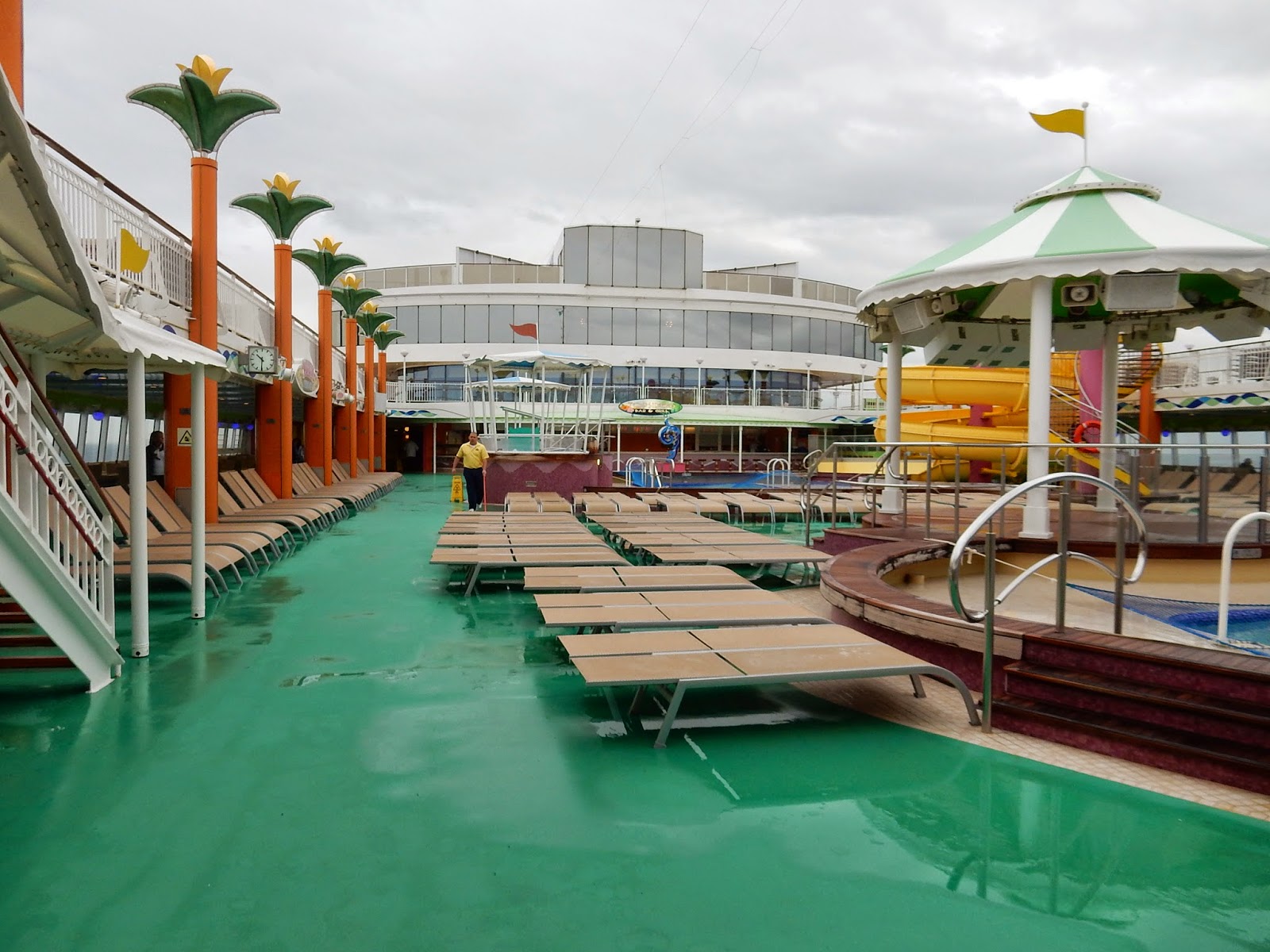 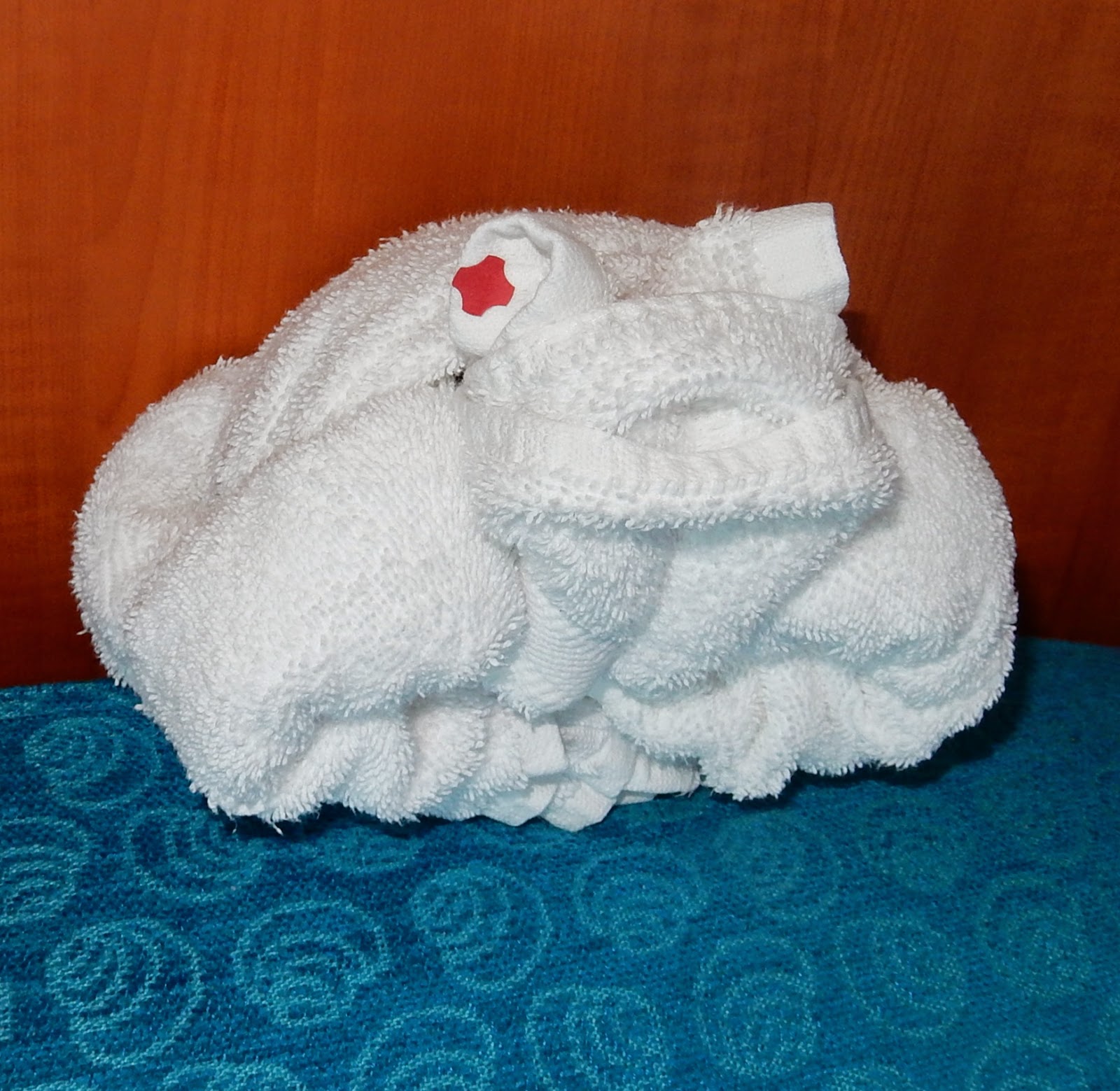 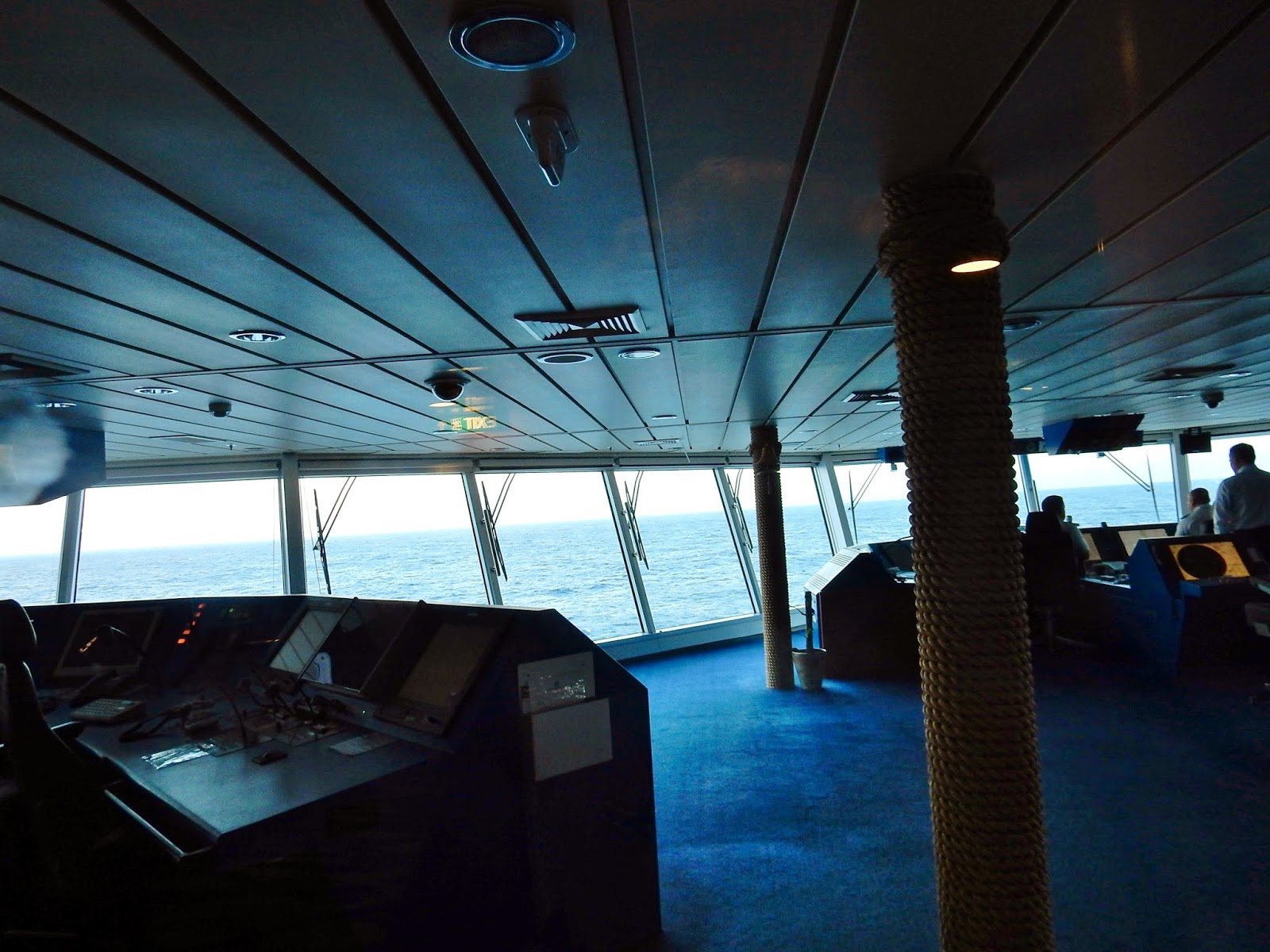 a display at the bridge 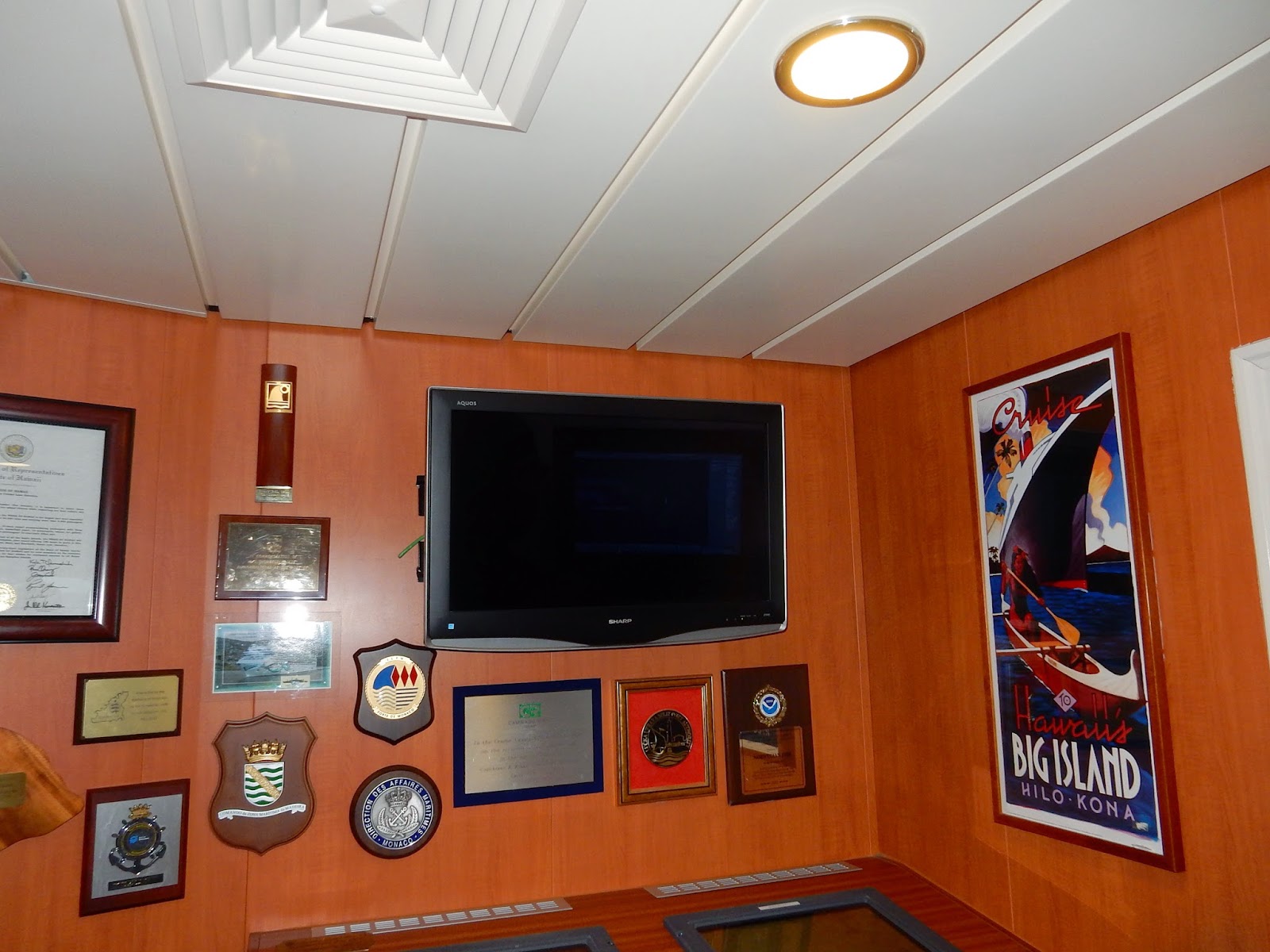 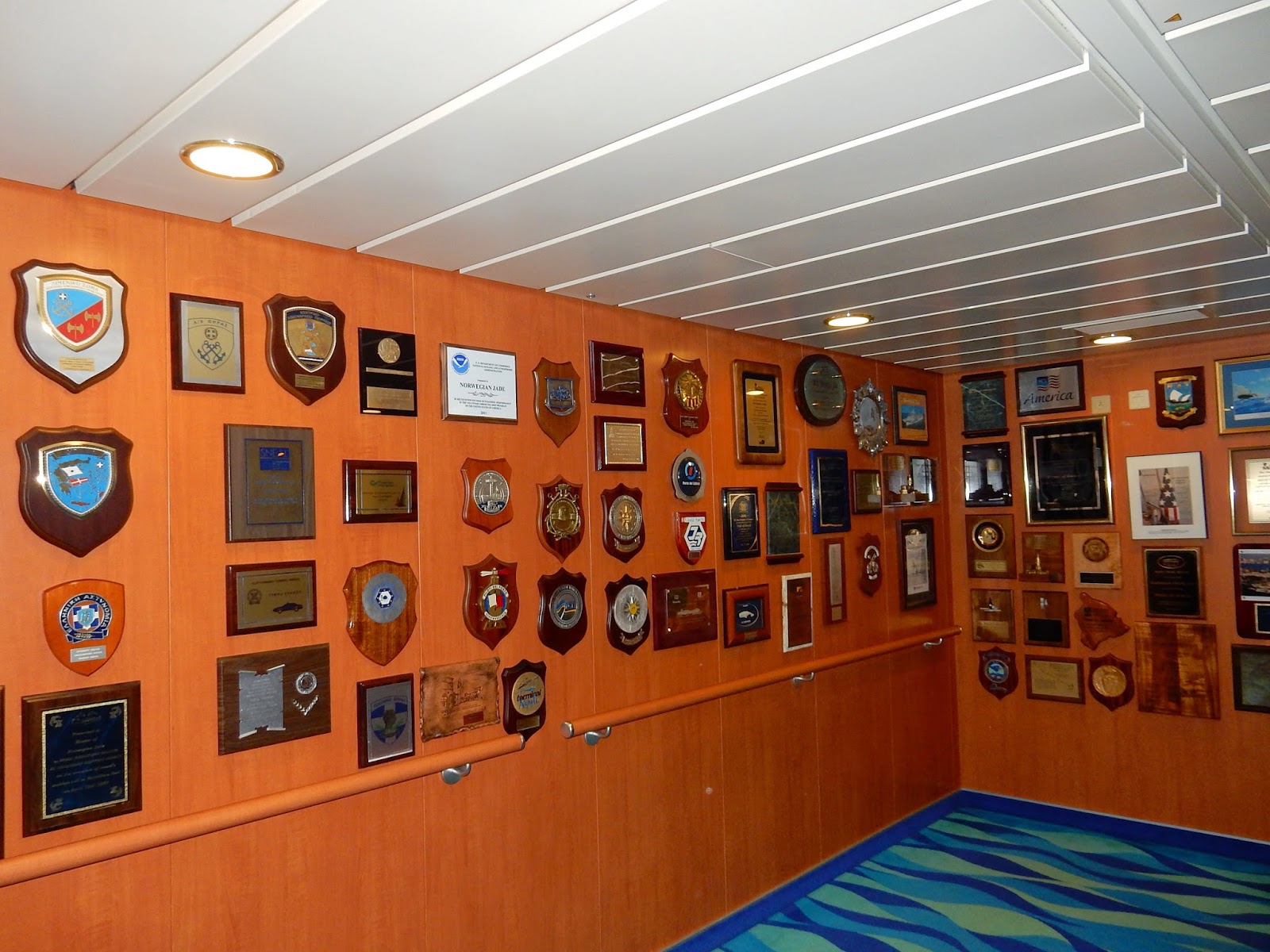 so who's driving this ship? 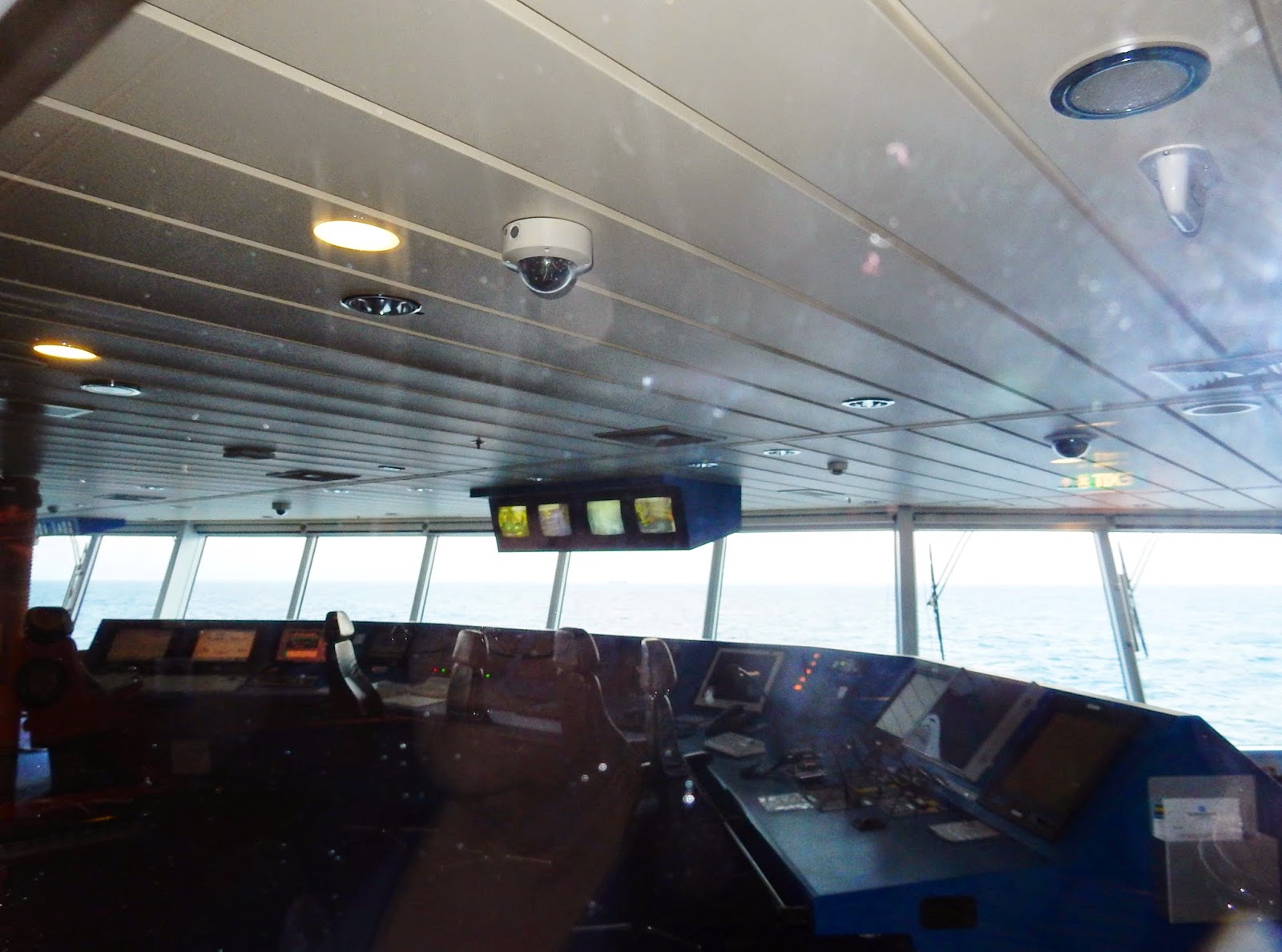 funny how the water looks lumpy 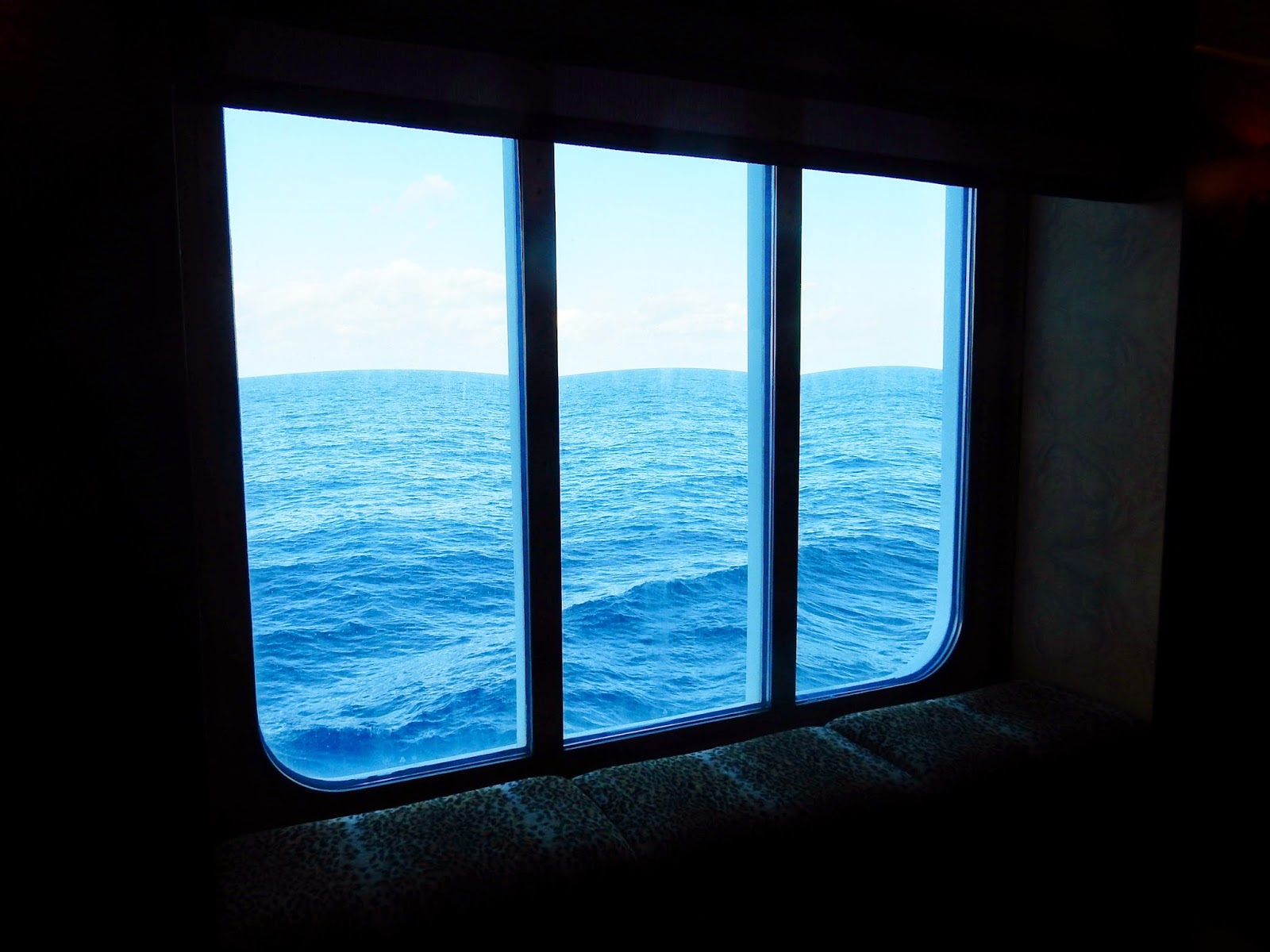