A visit to Vancouver Island

I set off from Delta about 8a.m to the Tsawwassen Ferry Terminal to catch a 2 hour ferry ride to Nanaimo on Vancouver Island. My destination was the city of Courtenay about a two hour drive from where i'd arrive at Duke Point near Nanaimo, B.C. Weather was cool with a spattering of rain off and on so I didn't spend much time on the open deck of the ferry and instead went with the hoards to the restaurant for some legendary White Spot fare or maybe the famous Sunshine breakfast served on all the ferries since time began I think, lol. Ever since I can remember the ferries always had names like "Princess of Nanaimo", Princess of Sanich" etc. and later on they were named "Queen" of selected British Columbian cities. This one was quite new and was named the "Coastal Inspiration" In this class is also the Coastal Celebration and Renaissance while some of the smaller ferries have names that start with Salish (Orca, Eagle, Raven, etc) as well as other classes and sizes of ferries that do the route to many of the smaller British Columbian islands. The larger ones carry aprox 500 cars and 2100 people and travel at 22 knots. Many who walk on and get transportation where they land and the price is very reasonable for that. At this time of year the ferry I took departs from Tsawwassen 8 times a day with 8 sailings back but in the summer there's many more as the trip is very popular then. Also from Tsawwassen are the ferries that go directly to Victoria, B.C. at the southern end of Vancouver Island and there's also one or more that does the route back and forth from Victoria to Seattle.

The drive was uneventful except I was astonished by a strange phenomenon that I hadn't encountered before. The 2 hour drive took you from dry to spattering, to raining, to pouring or pelting down to torrential sometimes all in just a few minutes and then repeated in a different order off and on all the way. But what really struck me as unusual was that other cars on the highway appeared to be enveloped in clouds as they drove along, lol, but it really did look strange seeing all the white puffs speeding along. The cause appeared to be the way the water was churned up by the tires making a thick mist around them. Maybe it happens here too and I haven't noticed that as I rarely drive on a 120km highway on my travels near home and the rain doesn't do that where I drive or at least to that degree as well as the fact that there's a lot more traffic around here. In any case it was a memorable experience and when I arrived in Courtenay it was a beautiful sunny day. Four days later the drive back to Duke Point was in exactly the same scenario and I found it to be very unusual but probably commonplace to those who live there although my niece didn't know what I was talking about. Wish I could have snapped some pics but I was driving and frankly it was sort of unnerving.

I had a nice visit for a few days with my Godaughter/niece and her cat Mickey. We shopped and talked and looked at old family pictures and ate out every night with deserts and Starbucks and got all caught up with our lives. It was a very nice break and I enjoyed my visit and hope to make the trip more often, preferably in the summertime!
Leaving the Tsawassen Ferry Terminal 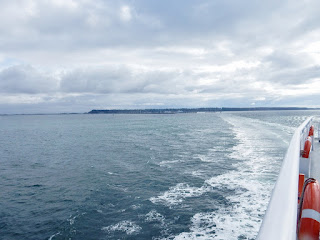 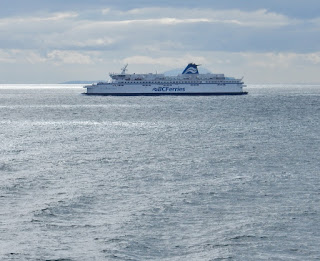 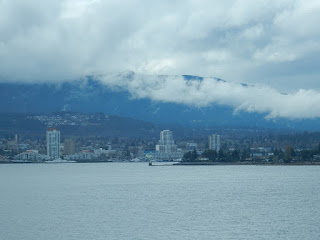 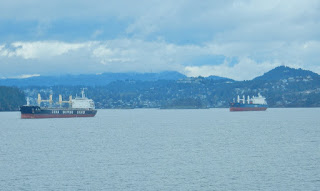 The captain announced a pod of Orcas was visible so lots of people ran to find a good viewing spot. They breeched several times and it takes your breath away when you see them but I only caught a tiny speck in the ocean on my camera. 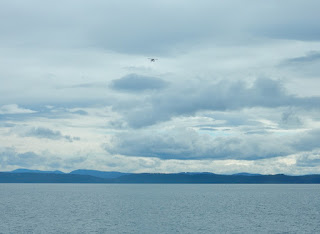 On my way back now and this is Roberts Bank, aka Delta Port. This is where my hubby used to work. It has expanded a lot since he retired and while they still load coal destined for China the container business is the larger business now. 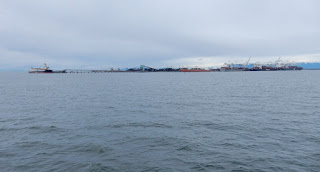 I looked carefully hoping to see the resident Orca "Westshore Willy" who lives and plays in the area here around Roberts Bank. He has lived here alone for many years and become very tame over the years. He likes to come up close to the workers to show off the big fishes he catches sometimes. Many of the workers there have actually been able to pet him and he is very friendly and gentle. 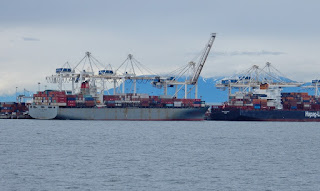 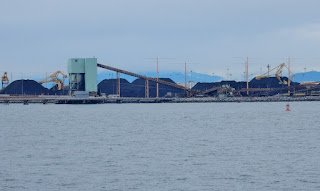 My view of another ferry as I sat in my car waiting to drive off. 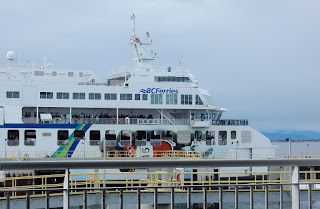