A visit from the Goddess of obnoxious odours

Late last night, as i sat computing, i suddenly heard spine tingling noises just outside of my window for a several seconds and then a terrible silence. I immediately thought it had been the death cries of a bird, caught by a cat, raccoon or maybe a coyote.

As i pondered the likelihood of it being a bird out in the night, much to my horror the urgent cries started again, closer this time.
I went to the kitchen and turned on the outside light and peered out into the darkness and the sounds again stopped. There was nothing on the deck, but suddenly what was that movement in the bush by the wall? I went into the sunroom to get a better view.

A flash of white trying to climb the wall....the size of a small cat; but not able to leap so is it a cat? It turned slightly to change direction and ran up the stairs in the center of the garden and i think this is who i saw; minus the black face with tiny white stripe 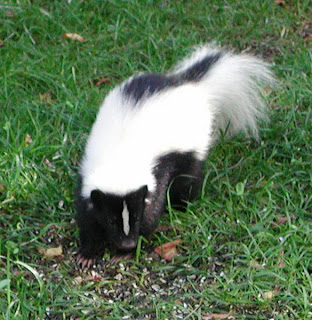 The one i saw was much whiter than these two pics from Google; in fact it wasn't two stripes at all but i think an almost solid white head and body perhaps with black legs but i'm not sure. I was seeing it mostly from behind and its tail was upright and fluffed out big. There was no doubt what it was; i had the pleasure of smelling the eau de pew.
I wonder if there's such a thing as albino skunks but Google just said it comes in many colours.

Its scientific name is Mephitis mephitis taken from the Roman Goddess of poisonous gasses.
Also known as striped skunks they live in the U.S. and the southern tier of the Canadian Provinces.
Their lifespan is 2 -3 years and they can reach a weight of 14 lbs.  Mephitis breed once a year and have litters of 4-8 kits. Diet changes with the seasons and right now they'd be eating mice, shrews and chipmunks so that's probably who was making all the noise. Since i only got a good look from behind i couldn't see if it was carrying something in his mouth.

Well, i knew we had been home to skunks before, but the usual black with white stripes variety and i thought they had long moved on. Who knows; maybe a kit stays back in the old home or it's a random spot that this fellow found or maybe he was enroute to somewhere else.

We'll be leaving him alone because he probably does us a favour by eating all the bad little bugs and critters in the garden although i don't consider chipmunks bad at all; they're very entertaining.
Anyway, the skunks i've seen arn't fast enough to catch a chipmunk or squirrel; those things can fly!

So he's welcome to live here as long as he dos'nt spray....one report said they can accurately spray up to 10'  but another said they have terrible eyesight and i can believe that as the one i saw was attempting to climb a tall wall instead of the shorter steps. Either way their odour can carry a mile and a half !
Posted by Lorraina at 10:52 PM 10 comments:

PUNS FOR THOSE WITH A HIGHER IQ and a lower brow: 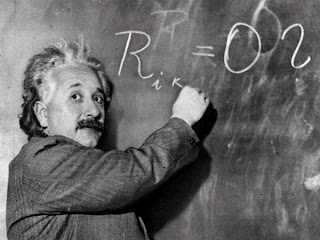 Those who jump off a bridge in Paris are in Seine.


A man's home is his castle, in a manor of speaking..


A man needs a mistress just to break the monogamy....


A hangover is the wrath of grapes....


Dancing cheek-to-cheek is really a form of floor play....


Does the name Pavlov ring a bell?...


Condoms should be used on every conceivable occasion....


A bicycle can't stand on its own because it is two tired....


In a democracy your vote counts. In feudalism your Count votes...


A chicken crossing the road is poultry in motion....


If you don't pay your exorcist, you get repossessed...


With her marriage, she got a new name and a dress....


The man who fell into an upholstery machine is fully recovered...


You feel stuck with your debt if you can't budge it....


Local Area Network in Australia - the LAN down under....


Every calendar's days are numbered....


A lot of money is tainted - It taint yours and it taint mine....


A boiled egg in the morning is hard to beat...


He had a photographic memory that was never developed....


A midget fortune-teller who escapes from prison is a small medium at large...


Acupuncture is a jab well done.

At the beginning of the year many people make resolutions for the new year. Some simply pick one word and that's what i'm going to do. I decided to make my focus word ENERGISE as this is what i most want and need. I havent been recharging very well for years already so the belief is that by focusing on this word energy will come.
When googled the word comes up as ENERGIZE which of course lead me to this. OK i want to be like brand new energised energizers or would that be energized energisers? Whatever; will these 4 help? 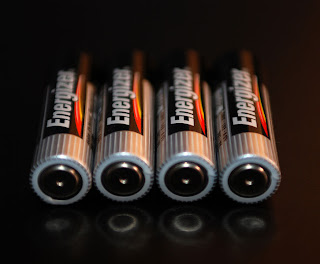 or maybe better yet i'll take one of these: 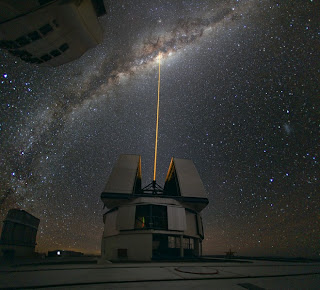 Right now i haven't got enough energy to check and see if i got this straight so don't be going and googling it cuz you might find totally different info but i think it's a laser that's precisely tuned to energise a layer of sodium atoms that are found in the upper layers of the atmosphere. It's thought to be a leftover from meteorites entering the earths atmosphere....or something like that....

Say what?!?  There's leftovers going to waste? Please land on me instead; i sure could use them!

I have Primary Biliary Cirrhosis. I've had it for 12 years. It's a chronic liver disease that causes slow, progressive distruction of bile ducts in the liver, thereby interfering with the excretion of bile.

Fatigue is the most common complaint of those afflicted with PBC. Most people haven't heard of it and there's still many Drs. who don't understand what it is or what to do about it although it's been around and known for a hundred years or more.

No, i've never been a boozer; thought i should mention it straight up as that's what most people think when they hear the word cirrhosis. I wouldn't deny it if i were/was, honestly! i know nobody cares, but alcohol related liver disease is different than this and most PBC'ers wern't/arn't boozers.  It's an auto-immune disease and really too bad it has this unfortunate C word in it's name because some never do get to the stage of actually having cirrhosis but we're still stuck with the name.

Women are affected 10 times more frequently than men. PBC is usually diagnosed in people 30 - 60 years old and many are diagnosed by finding of an abnormality during routine liver blood tests.

Itching and fatigue are common symptoms along with jaundice, cholesterol deposits in the skin, darkening of the skin (like a permanent suntan) or fluid accumulation in the abdomen and/or ankles. The telling tale for me was an itchy 3" x 4" patch of skin on one arm along with fatigue.

Other disorders associated with PBC are impaired functioning of the tear and salivary glands, arthritis, thyroid problems, renal stones and gallstones.

There's no known cause or cure although a wonderful medicine originally derived from bears bile called Urso, now made synthetically helps some people tremendously and most PBC'ers die from something else.