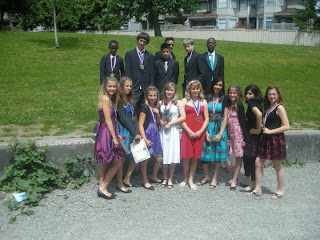 My grandson has graduated; Yayyyy Brandon!  Here he is with the graduating class (top 2nd from the right)and again with his little girlfriend; isn't she cute? Isn't he cute?
I think he looks like he's in training to be a rock star......
Well, hey, don't they all?

Brandons mom is one of my twins.
Brandons girlfriend is a twin.
Oh Oh.

I wonder if their relationship would or could last long enough to see if the twin gene appears again. They're just 13 yrs old now, so who knows.They say twins skips a generation so i guess that means Brandon could very well father twins someday.
Someday, in the future, a long time from now.  Way. way. way. in the future.
One of my grandaughters is engaged to be married this summer. She and her beau have been a couple since they were both 14 and they're 24 now.  Things start early in this family and relationships last. 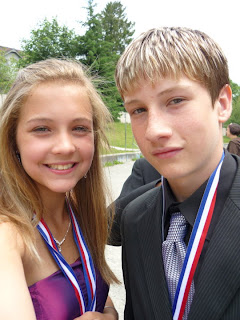 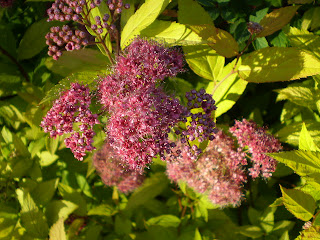 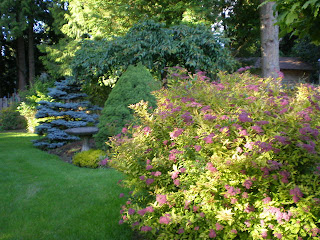 Blogger timed out on me before i was finished. Just a couple more to show
Heres 2 different Spireas. I chased a busy bee around the flowers for a while but he was so fast he ended up out of the pics.

Speaking of bees.....
My daughter told us she was driving on a busy street yesterday when the traffic all came to a sudden halt. There were 3 swarms of bees; so many she said they darkened the sky. I've never heard of this happening before; have you?
I think if the breeze from a butterflys wings can change something on the other side of the earth i guess that oil spill could have easily caused this.

And finally a heather thats blooming for the very first time in about 20 years!
That makes at least 4 really weird goings on in my garden right now. I wonder what it all means.
I love this heather but darn it; can't remember its name right now; do you know it? 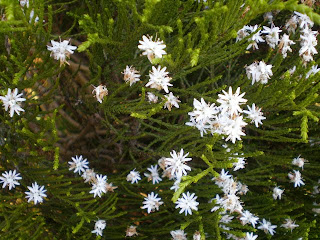 Its green is unlike any other colour in the garden, sort of mossy or metallical and just an unusual and nice change of green. My eye falls upon its oddness first when i gaze out pretty much all year round. Didn't get a pic from further away; i guess because its sort of lop-sided and splitting in the center, poor thing.
I hope you enjoyed your visit as much as i did!
Posted by Lorraina at 10:47 PM 8 comments: 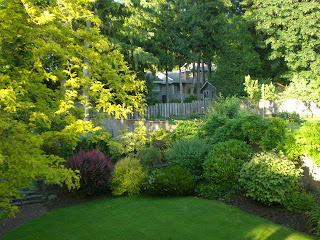 Its been almost a month since i put up pics of my yard and garden! Things got away on me yet again and my intentions to keep the growing season updated and current fell by the wayside (blame photoshop)

When i look out the window i see a sea of mostly green now; it's really a spring garden.
However, walking around i noticed a few things of interest so i ran and got the camera.
Yeah right; i ran, lol.....
Anyhow hope you enjoy my many shades of green.  First from the deck, then going down the stairs is the Kalmia. Its a nice plant and grows well here in only morning sun.   Rarely do i ever catch it at its best but this is close.  It's habit is to throw out new growth and always have some early bird flowers dying at its peak time. 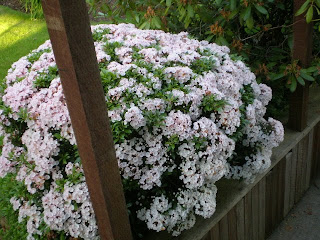 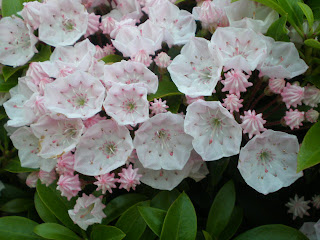 Then i spotted this little white Siberian iris 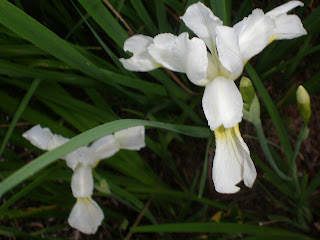 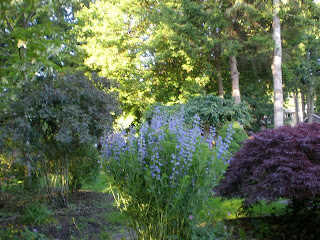 Here is Lamium but strangely it has decided to move into the neighbours yard and very little is left on our side of the fence now. I say strangely because our side at least has a little sun; their side dosn't get any. And it used to cover the ground and pathways in that area totally.
Who knows why plants leave home? Maybe, like kids it'll come home again....maybe like kids even a few times!  I won't mind because its much prettier than weeds and as you can see it smothers everything in its path. Here its taking over the neighbours old stump. 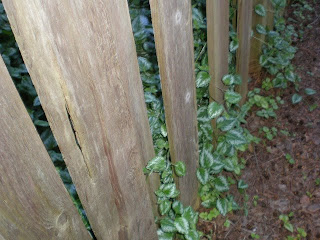 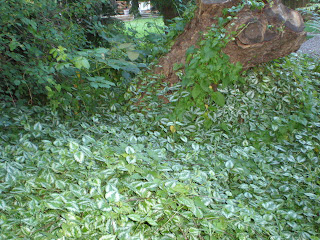 Poor neglected Rosa. I think her name is the Countess of something or somewhere.
Beautiful fluffy flowers in several shades of red to burgundy but never very many. They're not fragrant and its a sloppy plant. 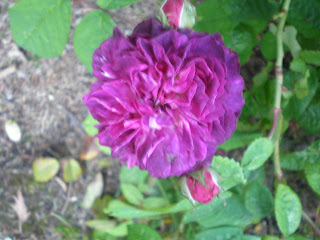 Next is the thornless climber "Amadis" 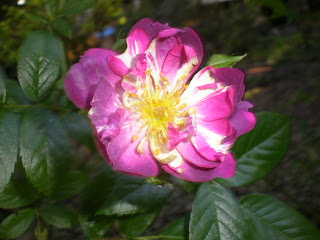 My favourite old fashioned species Rosa Glauca. Its blue/gray foliage is nice from afar and in the fall it has beautiful orange/red hips that the birds love. The flowers are simple, and thats the kind of flowers i love the best. About 8' tall and a problem free plant. Self sown seedlings come true making it my number one fav. of all garden plants 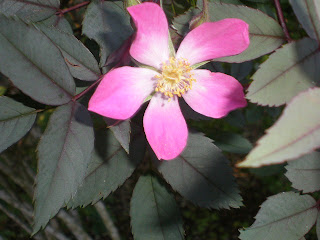 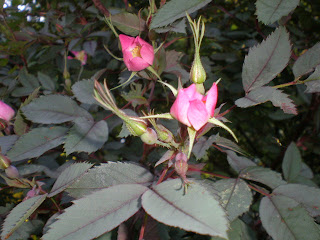 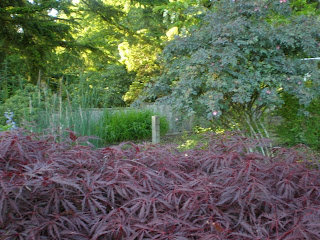 This is the blue flowered perennial sweet pea or Lathyrus Latifolius 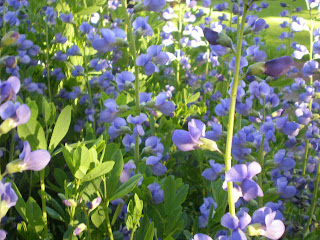 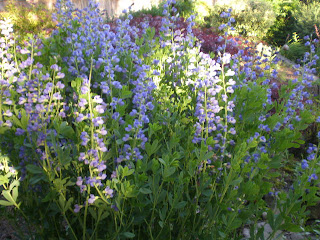 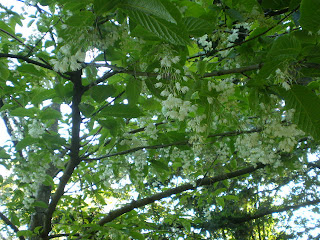 My friend Lalala is always cooking something that appeals to me; sometimes it's a comfort food that reminds me of my childhood and moms cooking.   Other times it's a dish that grabs my interest as the Asian influence is always appealing to me. Its all of the time healthy and yummy.

Although i've tried several of Lalala's recipes this time i remembered to take a couple pics.  It was delicious even with variations as hubby brought uncut ribs, and we already had regular soy sauce - he said he couldn't find the low sodium kind.....he gives me this or the "they didn't have it" story whenever he forgets something.  And then i couldn't find the cast iron pan, and never have had a dutch oven so i made do and they turned out great on the stovetop, and so easy. 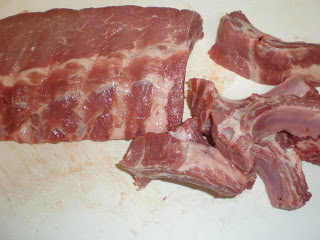 metric so not sure; about 2 lbs i think 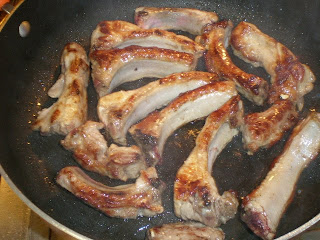 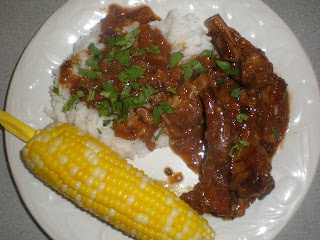 3 hours later.....even for a non-cook this was so easy and yummy
Thanks Lalala!
now, whats for dessert?
Posted by Lorraina at 2:21 PM 7 comments: