Memories; one old, lots of new 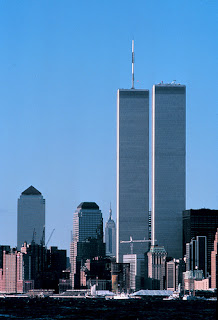 I selected this picture because the day is done and i wanted to remember the twin towers as they once were. All last week we watched shows with new film footage and new stories but the horror lives on in the basic facts. I crossed the border and went into the U.S. on that dreadful day, but nowhere near new York; in fact far far away to the little town of Blaine, WA in the Pacific northwest.
We had received a call from one of our daughters earlier in the morning and i knew something was wrong before she even said "America is under attack!" and then we watched the horror unfold. Later that afternoon i decided to carry on the plan i'd made for the day and crossed the border into the U.S.and drove through the main street of Blaine which was eerily bereft of people and pets. The sky was blue and and everything still but there were no sea gulls high above or crows or playful little birds flitting around as would be usual on a sunny afternoon in a beach town. It appeared to be an abandoned village but with a billion U.S. flags of every size flying everywhere and me by the side of the road bawling my eyes out. I shouldn't even have gone there that day but i am glad i did as i gazed at the blue sky and all those flags that shouted the unmistakable message that we will never surrender.In the P. O. people were gathered in quiet little groups and i heard a man talking about his visit to the Twin Towers and what great buildings they were. Another told of her son having been there the day before for an interview for a job.

Last week i watched a show about one of the air traffic controllers who left work that day never to return. Instead he worked on his boat and he and his wife have been sailing ever since. He said "i'm reminded of that day every day when i look at the sky and it's always that same shade of blue" He is seeing 9-11 over again and is torchered by simply by seeing the sky every day. I remember seeing the sky that day driving though Blaine even though i was thousands of miles away from where the tragedy occurred and my heart goes out to anyone who has such a simple pleasure taken away because of the tragedy. My heart goes out to all the citizens of the U.S. who are bravely carrying on with innocent memory triggers such as the sound of a plane, colour of the sky, smells or dust that makes them remember, when they really wish they could forget or better yet that it didn't happen. Another man i saw on tv sees the terrorists wherever he goes, driving along side of him, walking on the sidewalk, in a restaurant or in every crowd suddenly theres one of them and he has to deal with all the emotions again and again.

9-11-11 and this morning we awoke to the good news that little Kienan was safe at home. Kienan is a 3 yr old boy from Sparwood, B.C. who was abducted 4 days ago from his own home. As the days went by it was hard not to think the worst but the kidnapper returned Kienan unharmed during the night to his own home which was empty as Kienans family had to leave during the police investigation. The kidnapper then phoned the police and told them that the boy was safe at his home.When the police arrived they found Kienan sitting on the couch with his blanky and later this morning he was outside playing happily with his 7 brothers and sisters.It's so rare for a child abducter to return a child completely unharmed. We can tell easily that a miracle happened today. 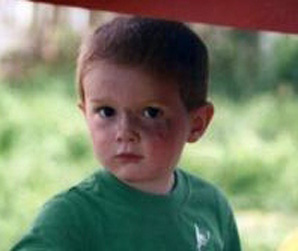 As i pulled into the parking lot of my favourite casino a couple of nights ago i happened to glance down to my milage readout thingy... and just about drove into a cement pillar when i saw this 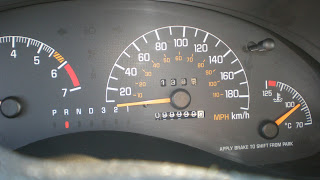 I can't believe i've put that much mileage on my car as i hardly ever go anywhere! However my car is now 9 yrs old and guess those little jaunts add up. I pulled in to a parking slot as it rolled over into the big one and now i guess my car isn't worth as much as it was in the first pic. 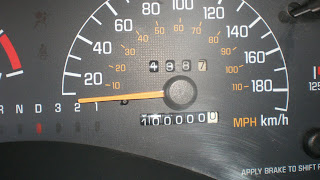 Lately i've been a-hankering to do some reading. I used to read a lot but not so much now since i seem to have developed a problem of not concentrating very well anymore. Guess its another of those getting old things and a wandering mind. I can read the newspaper every day and remember some of what i read but books...fergit it; i just keep re-reading the same page over and over and still don't know whats going on. Time to investigate audio books! So off i go to the local library and yes, they have an extensive collection for loan and ability to bring in just about any books a person could possibly want. So i ordered a few and then went shopping for some old version of listening to them. I know i better get old technology, no geeky gadgets for me because i might not understand how to operate a new-fangled thing, in fact i have enough trouble with my cell phone. So, see, i'm not stupid, i know and admit my limitations. Plus i know new tech is way more expensive and i just want something cheap in case it dosen't work out so i was feeling it.
Problem: old tech is hard to find these days. Then the salesman in one store insulted me asking "Do you even have a computer? Do you know how to download? Do you realize how much it costs for audio books?" I went to Ebay and Craig and they had some but i decided to check out a few more local stores and found exactly what i thought i wanted 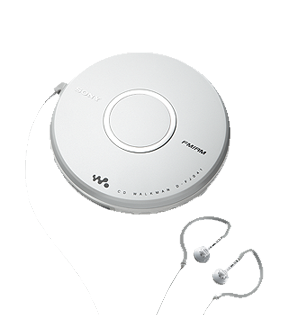 Sony Walkman with earphones that stay on the ears....or so it said. So i bought it and it wasn't until i got home that i noticed it had been pre-owned and very cleverly re-packaged. All it's parts were not in the box. One of the audio book versions available required an adapter which wasn't included but i forged on thinking i'd just get the books that don't need the adapter. Well! After spending 20 mins getting the thing open and then finding it didn't even come with batteries i was choked but rounded up a couple batteries from the smoke alarms and tried it out. A couple minutes later the earplugs were off so i jammed them in real good but a minute later they were off again. WTF! I bought the thing not knowing this was even a problem but relieved because it said Sony had corrected it! Stupid me i fell for it! I thought i'd never have to know the despair of loose earphones so i sat there holding them onto my ears while listening to a woman's voice reading me a story and i hated her right off the bat when she changed her voice to mimic what the other person was saying. OMG then she did it again when a third character, a very gruff sounding male entered the story! The speakers attempt at manliness made the guy sound like he was angry, which according to the words he said as he greeted his friends wasn't. But i persevered and listened for while also reading "how to bookmark your spot" Meanwhile i was wondering where should i look as i listen? The ceiling or the floor or out the window or what?  OK this is not what i expected so i bookmarked the spot in case i decided to carry on with these weird sounding fake female/male people. But i guess i hit the wrong button and then it was all over, the end, or i guess it was also the beginning again. Granted i should have known...audio books are for blind people so there's not usually a problem of where to look. Smart blind people. I can see, and now that i can see that - i have to dig the sales receipt out of the trash and get this stupid thing off my hands asap. The good thing is i at least tried it out and know now i don't ever want to listen to an audio book ever again. I didn't pay for high tech or learn how to download books online or buy all the gift cards the salesman said i'd need. I'm free as a bird now and back where i belong and going to try to read properly again, like the old fashioned way. I'm so proud of myself today for trying out something new, knowing i hated it and then taking care of the situation all by myself.

So, we went to the annual car club picnic and stuffed ourselves with fried chicken, salads, pulled pork, corn on the cob and apple pie. 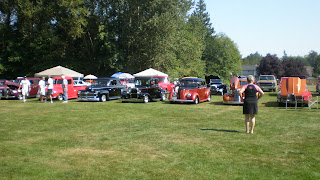 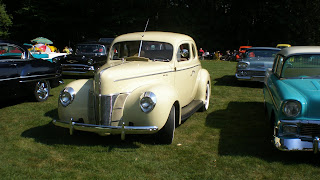 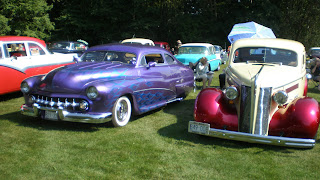 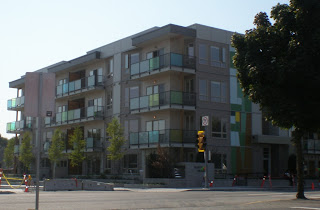 The ground floor corner unit in the center of pic. Bob liked it best and it was nice but small and while centrally located in a nice community about 25 miles from here i'm still hoping to get into another place in the opposite direction that i like better......This is soooo us to not agree on anything.  But i don't think a move will happen anytime soon anyhow. Most or all of these types of places have just one parking spot with an option to purchase another for a very steep price. We have 3 vehicles. We need 3; mine, his and the hot rod. Plus alot of places don't allow pets so that would be a definite deal breaker. It's not going to work so i think we'll stay put for now. Who knew it would basically all come down to parking spots? and a 16 year old cat. Well, i did think of other things as well like changing cable and internet company, phone, email addy, bank, supermarket, etc; and losing my hairdresser would make me sad as would changing Drs. after all this time.Those are biggies although i'd like to think i'm adaptable don't have to put it into effect much. Everything is walkable from this condo; even the casino, yayy, just down a block and a half and they did have some nice art in there though poor pic. The white parts are pearly irridescent and very striking in real life. 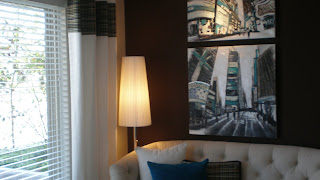 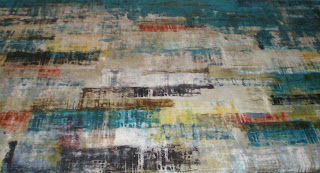 But probably wouldn't keep their art anyhow as i do have some great stuff of my own to hang.
When we got home the first thing that hits when you enter is the most wonderful fragrance of a bowlful of ripe guavas i like to keep around for as long as we can get them. 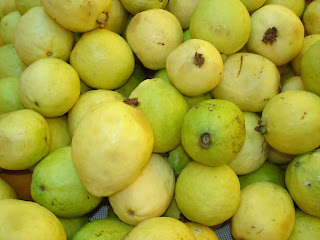 Their fabulous fragrance drifts through the whole house and i love the scent so much i might try to grow some. The seeds need to be boiled for 5 minutes or soaked in water for 2 weeks before planting. I can do that. Also snacking on edamame beans and they are totally delicious, nutritious,low cal and an anti-oxident as well. Then i checked on the live feed to see what the final 3 Big Brother contestants were doing; they were eating and what are they eating but edamame beans! Overall it turned out to be a very nice day despite the 10 yr anniversary and reliving it over again. I hope everybody is moving on and finding joy in your everyday lives. 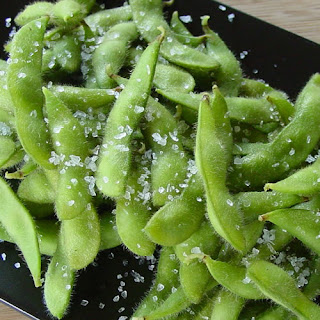